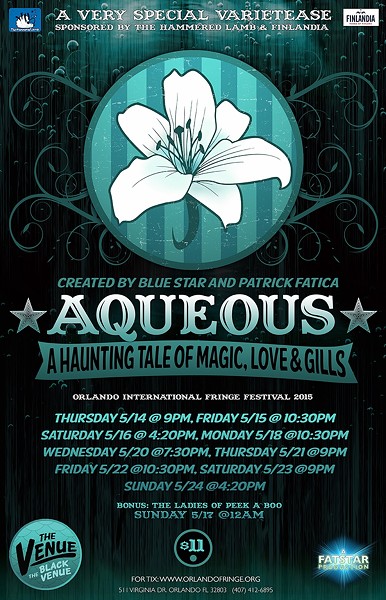 Ever since 2007’s Carnivale, Blue Star’s VarieTease has been transporting Fringe audiences to strange new worlds with eclectically curated soundtracks and sensual choreography that has evolved far beyond any mere burlesque. In Aqueous, VarieTease voyages under the sea for a fishy fable with fairground flair.

Blue, looking a bit like an anime geisha, stars as the ringmaster of an aquatic turn-of-the-century freakshow; she keeps her half-woman/half-fish exhibits enslaved with the aid of magical powders and pills. An innocent audience member (played by Jack Kreeger) becomes enamored of Lola Selski, the show’s headliner, who is held captive in a steampunk water tank. The star(fish)-crossed lovers attempt to escape with an impressive display of hand-balancing (performed to Waterlillies’ “Take My Breath Away”) and trigger a mermaid revolt that makes sushi of the whole sideshow.

Aqueous is romantic and atmospheric, thanks in part to Kyla Swanberg’s scale-inspired costumes and some lovely underwater lighting effects. As always, Blue’s choreography athletically blends classical and club styles, with high-energy ensemble numbers and sole-ful solos. Between dance scenes, soft-focus video vignettes filmed by artist Patrick Fatica (who also penned the show’s story) fill in some of the backstory; I personally found the leisurely-paced clips more enervating than enlightening. Even if it isn’t quite as mind-blowing as my all-time favorite VarieTease productions, Aqueous is well worth diving into.