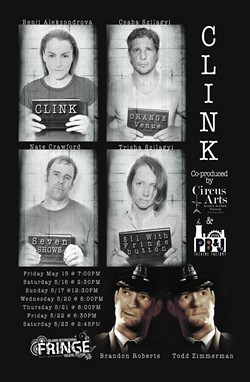 Condemned prisoners have been known to earn advanced degrees, produce works of art, and develop their physiques while serving their sentences. But I sincerely doubt many convicts in Florida’s penal system could perform the feats of strength and agility demonstrated by Benji Aleksondrova, Nate Crawford, Chris Zaremba and Trisha Szilagyi in Clink. And I’m certain that the incompetent, abusive guards found in actual prisons are a lot less entertaining than Brandon Roberts and Todd Zimmerman are as a pair of wacky watchmen.

Clink is billed as an equal collaboration between Circus Arts, producers of 2014’s Ennui, and the silent slapstick stars of PB&J Theatre Factory. The show turns out to be about 75 percent circus and 25 percent silly, as Roberts and Zimmerman serve mostly to smooth transitions between the impressive aerial athletics, which are framed as flashbacks and fantasies of the escape-seeking convicts.

Acrobatic acts utilize an enormous (and scarily shaky) climbing rig with flying fabrics and hangman’s nooses, and an electric chair is employed during a limber hand-balancing act. The show’s highlights are two comically choreographed bits where Zimmerman and Roberts are roped into the action, sliding across a slick table and trampolining over a barbed-wire wall with klutzy grace worthy of the Keystone Kops.

At the performance I saw, the cast included Csaba Szilagyi. Unfortunately, Csaba was injured during a show – he completed a performance with a torn pectoral muscle – and is now recovering from surgery. The run will continue with him, after modifications to the production.

I was hoping for a little more of PB&J’s patented Chaplin-esque storytelling from this big house tale, but any fan of the big top will find plenty to applaud at Clink.