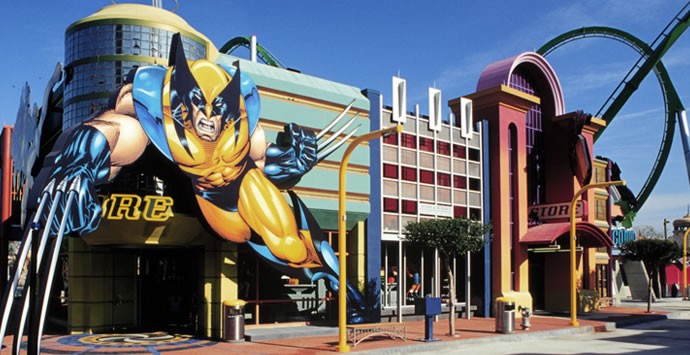 With the recent news of Universal partnering with Nintendo, many in the theme park fan community have once again begun speculating about the future of Marvel at Universal Orlando. With all of the rumors, speculation and recent news, I’m going to attempt to summarize what we know, what we think we know, and what we have no clue about in regard to this whole Marvel in Orlando mess.

Here's What We Know:
Back in the 1990s, long before Marvel was acquired by Disney, they signed an impressively tight contract with Universal for the rights to the characters in use within theme park attractions. The contract limits the use of the characters on the east coast of the country to Universal Orlando with even tighter restrictions within a 60-mile radius of the Orlando parks. The contract does have a few stipulations, like ensuring upkeep of the rides, but overall is definitely more favorable to Universal than Marvel.

Since that initial contract, Disney has bought Marvel, pumped millions of dollars into it and made it one of the most popular brands in modern film history. With billions of dollars in sales annually Marvel has proven to be a cash cow for Disney. The company, long known for its theme parks tie-ins, has already announced a ride in Hong Kong along with a small exhibit at Disneyland in California. While Marvel is slowly but surely being rolled out into the Disney parks globally back here in Florida, that airtight contract from the 1990s still blocks them from building anything at their most popular resort complex.

Here's What We Think We Know:
Almost everyone can agree that Universal and Disney are in talks of some kind regarding the use of Marvel. Disney has tried to introduce Marvel into Orlando very carefully, with in-park movie previews (where they dropped Marvel from the name and didn’t include the in-theater effects that the Disneyland version featured) and Marvel skins on the monorail (they put it on the resort loop as to not confuse it for an in-park ride) but have yet to put any type of permanent attraction, even something as simple as a meet-and-greet, in the parks. They did recently open a new Marvel-themed store at Downtown Disney, er Disney Springs, but again dropped Marvel from the name, opting instead to call it ‘Super Hero Headquarters.’

Some have argued that Disney could use Marvel characters that are not related to the ones Universal currently is using (Hulk, Fantastic Four, Spiderman, X-Men, and Dr. Doom), but Disney has yet to do this outside of a short-lived meet and greet with Starlord and Gamora from Guardians of the Galaxy that was featured during a special event last August. That 5 hour event has been the only pure Marvel thing that we’ve seen within Walt Disney World and even then, they were very careful how the two characters were presented.

The lack of in-park attractions for updated Marvel characters such as Guardians, Ant-Man and others, point to larger issues with the contract, one that both sides likely recognize.

What We Have No Clue About:
With Disney practically printing money with Marvel, many rumors of a buyout of the contract have been floating around. The question here is ‘What is Marvel worth to Universal?’ And with that, one has to wonder why any company would let one of the biggest franchises in modern movie history leave their parks to be placed in the main competitor’s park. With an airtight contract many seem to believe that Universal won’t be giving up any rights to the Marvel attractions.

Parkscope, a tourism site that specializes in Universal, has stated The Hulk coaster will be getting a major update later this year or early next. They point to this update as proof of Universal’s commitment to keeping Marvel at Islands of Adventure. Others, such as WDW News Today, have stated that Marvel Super Hero Island may be completely re-themed. The basic, off-the-shelf drop tower, Dr. Doom’s Fear Fall, will likely make way for a new attraction while Hulk is simply re-themed.

Both sites, along with large swaths of the theme park blogosphere do seem to be in agreement that no matter the plans, Dr Doom’s isn’t long for this world. WDW News Today makes no mention of Spiderman’s future, but with Disney’s joint custody of the character, they may be more willing to let Universal keep it for the time being. With that, a re-theme of Marvel Super Hero Island would simply be a re-theming of two to three off-the-shelf style rides.

Images have been circulating on Twitter amongst Universal fans that does show plenty of room behind Dr Doom’s Fear Fall for a Spiderman sized ride building, the thought being a new dark ride could be replacing the uninspiring drop tower ride.

Such re-themings or re-skinnings aren’t unprecedented at Universal Orlando. Two of the coasters and a restaurant in the Harry Potter area of Islands of Adventure, are re-themes from the former island. Next door at Universal Studios a smaller re-theming was done on Disaster. That ride, formerly Earthquake, still has the central ride but all three pre-shows were updated. Also at Universal Studios, Simpsons and Despicable Me both use a basic ride system from a former attraction though little else was preserved.

The other question that arises from the possibility of Marvel leaving Islands of Adventure is what a suitable replacement would be. The island is by far the densest of the Islands with a uniquely urban sci-fi feel. Universal Studios Singapore has a similar land to Marvel Super Hero Island named Sci-Fi City. Within their Sci-Fi City land a teacup ride using similar ride vehicles to our ‘Storm Force Accelerator’ is simply named ‘Accelerator’ and lacks any connection to an outside brand or character. With Doom gone and Accelerator getting the same treatment as it’s Singaporean clone the only major update to the Island would be the Hulk ride.

The use of Marvel on the island outside of the rides itself is mostly in cutouts and other easily replaceable signage. The bigger issue is the use of Hulk and other characters in Universal’s marketing up to this point. While it’s not unprecedented for a park to lose a brand (Disney’s Hollywood Studios has seen a number of characters come and go over the years) giving one to your main competitor is quite different.

Two major brands have been floated as the possible replacement to Marvel at Islands of Adventure. Since early last year rumors of Star Trek coming to Universal Orlando have been floating around. That intellectual property has been posted as a possible replacement for everything from Kids Zone to Shrek to Disaster. The possibilities of it moving to the Marvel Island mostly tie into rumors of the island getting Singapore’s Sci-fi City theme. With that, theming Star Trek and Spider-man could call the same theme park land home without any major disruptions to the overall theme.

A strong rumor in the past few weeks has been Nintendo. With the recent partnership between the two companies announced we know that Nintendo will be coming to the Orlando parks in some form. Recent rumors point to the Marvel Island as part of this. The strongest rumors seem to point to it replacing Marvel and Toon Lagoon both. This would bring the number of islands (or lands) at the theme park back down to six, though there is some confusion over how Kong will be counted in the eyes of the general public. The Nintendo rumors do include Spiderman leaving along with the other Marvel rides, an odd move for what continues to be voted as one of the best theme park rides in the world.

The Nintendo rumors also are strong surrounding it replacing Kids Zone at Universal Studios. Could one partnership replace 3 major areas in the parks? That would be nearly twice as much ‘themed land’ as what Harry Potter replaced (one land at USF and one half of a land at IOA).

The entire debate in regards to the trade or buy-out between Universal and Disney really boils down to one major sticking point; is the price that Universal is willing to commit a breakup for really worth it? Rumors have been in the ballpark well north of $1.5 Billion. That’s 3 times the estimated cost of Diagon Alley and nearly half of what Marvel as a whole cost Disney to buy initially (a cool $4 Billion in that deal).

With Marvel at Universal, Disney does profit ever so slightly from the sales of Marvel merchandise. To spend billions of dollars on a brand before shovels ever hit the ground shows that moving Marvel down the street would eclipse every other brand integration in theme park history in cost alone.

Is the addition of one group of characters in an already successful and expanding resort really worth that?