Victoria Smith, a 29-year-old exercise enthusiast and aspiring waitress, recently told Jezebel she was rejected for a server job at Orlando's The Tilted Kilt, because her legs were too muscular.

According to Jezebel, Smith met with staff at the Tilted Kilt for three rounds of interviews last week. "The first was brief but went well, she says, and she was asked back to try on the Tilted Kilt uniform, a short plaid kilt paired with an equally short white top. For her second interview, she met with assistant manager Samantha Mosca, where she modeled the kilt. In the third round, she met with both Mosca and general manager Scott Gasiorowski."

Smith tried on a medium-sized kilt, but Gasiorowski noticed that it had no button on it. He handed her a small and asked her to change. A Kilt employee helped her change in the bathroom, wished her luck, and, to paraphrase what Smith told Jezebel, predicted confidently that with her breasts, she’d probably get the job easily. But the skirt was tiny, Smith says. She posed for a selfie in it while she was in the Kilt’s bathroom:

“I was like, ‘This looks too short, it doesn’t look like I can bend at all,” she says. Gasiorowski, she says, told her when she came out of the bathroom that the length was “fine,” but the way the skirt hung over her hips and legs was all wrong.

“Because it’s a kilt, it has to be straight down,” he said, according to Smith. “It can’t flare out around your hips. It has to hang straight.”

After that, Smith adds, he stared at her legs for a moment, then added, “What sports do you do? Softball?”

Smith replied, with a smile, that she body-builds. Gasiorowski, she says, responded, “Oh yeah, your legs are probably pushing the skirt out. You’re muscular. OK.”

Gasiorowski, she says, “kept emphasizing the legs: ‘You’ve got a great body, but your legs?’” Finally, he told her she was “too muscular” to fit into the skirt, adding that it was “company policy” that it had to hang in a certain way, adding that the fit of the kilt mattered “over personality.” 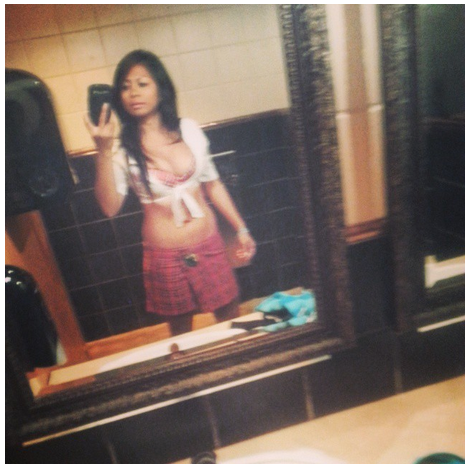 Based on what we know from past lawsuits with establishments like Hooters, it is completely legal (and gross) for a "breastaurant" to refuse employment to someone based on physical appearance.

Smith told Jezebel she got into bodybuilding because she was suffering from PTSD, depression and anxiety. She also went on to say the whole experience has been “humiliating.”

If you're interested, The Tilted Kilt is still "casting" for new employees.