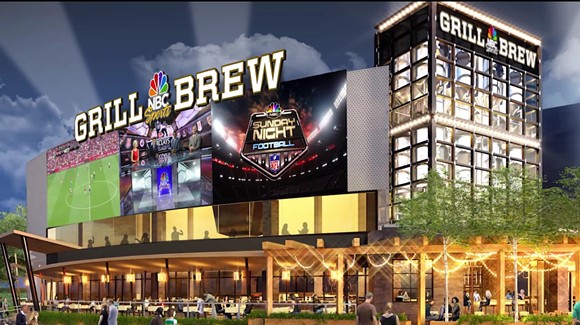 Sports-loving theme park fans rejoice: You finally have a place to grab a brew and bask in the reflected glory of oversized athletes between laps on the "Harry Potter and the Escape from Gringotts" ride. To the shock of absolutely no one, Universal Orlando today confirmed what legal filings had confirmed weeks ago, and announced the fall 2015 opening of the new NBC Sports Grill & Brew on the spot in CityWalk where the little-loved NASCAR Sports Grille once stood.

Details about the new restaurant are currently sketchy, but here's what we know the NBC Sports Bar & Grill will have:
The whole project is said to have a "VIP luxury suite" feel, though we'd like to see how well that exclusive atmosphere is maintained once it's full of overtired kids and their inebriated parents. While we wait for an official opening date, here's a shameless piece of Comcast corporate synergy to share the announcement: