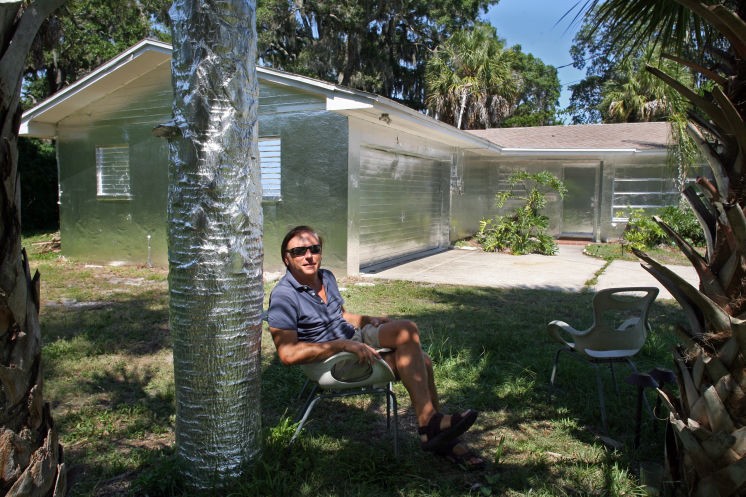 Tarpon Springs resident and foil enthusiast Piotr Janowski was inspired by Florida's natural beauty in such a way that he decided to cover his house and surrounding property with aluminum foil. Now, it would appear his neighbors think it looks like garbage.

"This is art," Janowski said to the Tampa Bay Times. "In their thick, bureaucratic books, I'm sure they have nothing against this."

Tarpon Springs police Sgt. Ed Miller claims residents have called his landlord and city arborists have inspected the trees, but so far no one can find any justified reason for Janowski to be forced to remove the foil. "Code enforcement is still trying to determine if the project is violating any ordinances," said Miller.

According to the Times, when Janowski (a graduate from the School of the Art Institute of Chicago) moved into his 1,180-square-foot rental in Tarpon Springs, "he was enamored of the sunshine and the shadows of the palm trees."

"I was really happy with the location, the garden," he said. "And from that time, something was cooking in my head," said Janowski, who finished the project last May with the help of his friend Paul Mlynarczyk.

Using an adhesive spray, Janowski covered one-third of his home in foil. "This is a bit like you're making gold leaf," Janowski said. "The house was simply about the transformation, how easily you can transform an ugly, ordinary house to something else."

"I don't know what the heck that thing is," said Janowski's neighbor Lynn Martin to the Times. "It's the strangest thing I've ever seen in my life."

Janowski's landlord has declined to comment on the situation and apparently the foil will remain for another month.

You can see a gallery of Janowski's work over at the Tampa Bay Times.