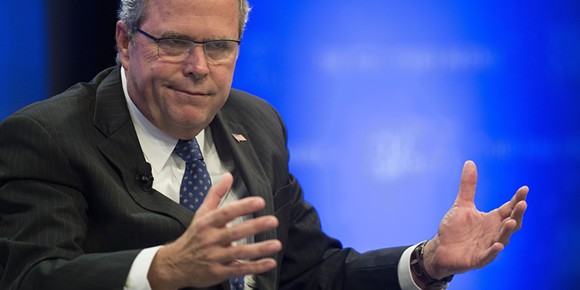 In a bold move that will surely capture all of the senior citizen votes in 2016, former Florida Governor Jeb Bush told CBS's Face The Nation that the retirement age should be raised.

"We need to look over the horizon and begin to phase in, over an extended period of time, going from 65 to 68 or 70, and that, by itself, will help sustain the retirement system for anybody under the age of 40," he said in last Sunday's broadcast.

Bush's argument is that Social Security will eventually owe more to retirees than the program receives, which is true. So, by raising the retirement age you're putting all the weight on younger workers to make up the difference.

As the Washington Post points out, fixing Social Security isn't that simple.

"Proposals to raise the Social Security age often have the potential of hurting the poor. Wealthier people tend to live longer. As a result, they draw benefits for more years after they stop working until their deaths. Increasing the retirement age by the same amount for everybody could actually result in poorer retirees receiving benefits for a shorter period of time.

The details matter, though. As Andrew Biggs of the conservative American Enterprise Institute has argued, raising the retirement age might result in more Americans applying for disability benefits, because there will be several more years in which they might be injured or fall sick before they reach retirement age. Those disability benefits might make up some of the gap between rich and poor in welfare for elderly workers.