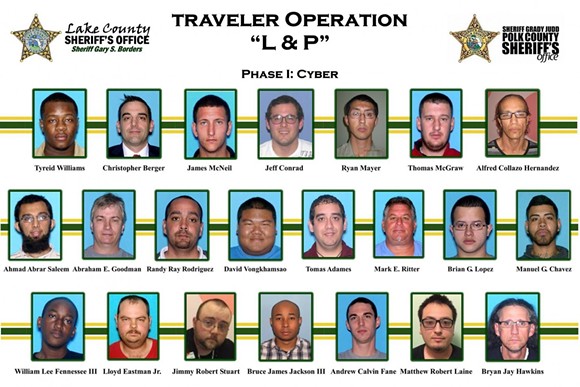 In a recent sex sting operation coined "Operation: L and P" conducted by Polk and Lake detectives, over 100 arrests were made for soliciting sex with minors and advertising for prostitution, some of which were Disney and other Orlando theme park employees.

The Washington Post reports that this two phase operation, composed of cyber and prostitution investigations, was conducted in a vacant Clermont house where officers posed as children, parents of children, or individuals looking for prostitution. The suspects soliciting sex with minors online were expecting to find children as young as 10-14 years old when they arrived and some brought sex toys, condoms or illegal drugs with them to the location.

Polk County Sheriff Grady Judd held a press conference following the operation which detailed the conditions surrounding such an overwhelming number of arrests. "Their communications and desires were outrageous and deviant," Judd said. "All 22 [in the cyber phase] traveled to have sex and brought outrageous tools for deviant sex."

Unfortunately for Florida, this isn't the first time a massive sex sting has uncovered shocking results involving theme park employees. In February of 2014, CNN reported mass arrests following a week-long investigation, named "Be Mine", that targeted similar crimes of soliciting minors for sex. 3 suspects in this investigation listed Walt Disney World as their employer.