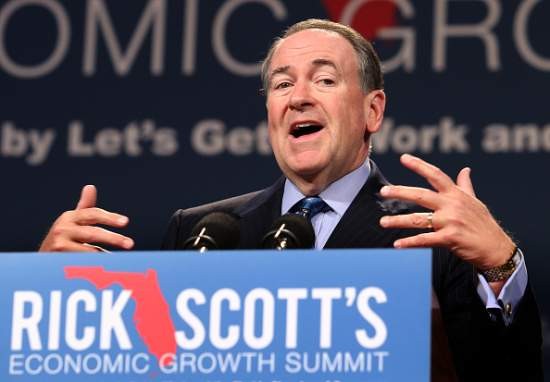 Mike Huckabee, former Governor of Arkansas and guy who would do anything to shower with women, is very concerned that New Yorkers are sullying the conservative paradise that is Florida, according to the Daily Beast.

"I just hope they leave their New York attitude of high taxes and high regulation back in New York City, back in Albany—bring their best recipes for shrimp and best recipes for grouper, but for gosh sake, do not bring that regulatory environment from New York," said Huckabee last Tuesday at a speech at Walt Disney World Orlando.

Huckabee is a Florida migrant himself, but his fears of Florida turning blue because of invading Yankees aren't based on any real facts. Florida has a long history of New Yorkers moving to The Sunshine State and more often than not, they actually move here to become more conservative.

If you track the margin of support for the winning presidential candidate in Florida versus the rest of the country, Florida only started voting more heavily Republican in 1960 — the same year the number of New York-born Floridians first surpassed 5 percent. There are a few possible reasons for this. The first is that the people who move to Florida tend to be retirees. While it hasn't always been the case, older voters tend to vote more Republican. That's particularly true right now, meaning it should hardly be a disincentive for the state Republican party.

But the third and most important reason for Florida's voting shift is that Florida is a Southern state. Over the latter half of the 20th century, the Deep South went from dark blue to dark red. Georgia, Louisiana, Alabama, South Carolina — all states that moved away from the Democratic party even more than did Florida. The migration of people from New York was almost certainly a drop in that demographic bucket.