June 12, 2015 at 4:57 PM
comment
Local artist Brendan O'Connor (also editor of Bungalower.com and former calendar editor for Orlando Weekly) has spent a lot of his free time creating public art. From mosaic murals in Apopka to brightly painted chairs left at desolate bus stops to Dumpster painting in Orlando, he's left his colorful mark all around the area. In fact, he spent the last three weeks transforming an old traffic-camera box into this piece of public art, with the blessing of the Mills 50 Main Street organization, which has made it a mission to beautify ugly utility structures. O'Connor called this sculpture, Put a Bird on It. 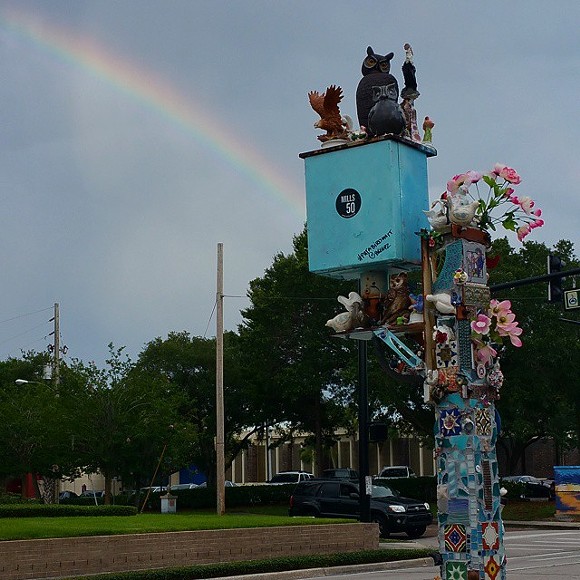 But recently, the Florida Department of Transportation mysteriously decided the fixture was too close to the roadway.

"They showed up yesterday and started removing it," O'Connor says. He says that somebody called Joanne Grant, executive director of Mills 50, to tell her it was being dismantled. She showed up and, he says, and "she chased off the crew." At least for the time being.

Grant says that Mills 50 has a contract with the City of Orlando Traffic Engineering Department to beautify such things as utility boxes and other fixtures along the public sidewalks and streets. She says that Mills Avenue is a state highway controlled by the Florida Department of Transportation, so the agency has the right to tell the city to remove anything it thinks is a problem. And all of a sudden, she says, it decided this pole had to go because it was too close to the road. "I was informed that FDOT wanted it removed because it was a 'safety hazard'," she says. "It was a non-functioning traffic device in 1988 – in that location for 25-plus years – so I am mystified as to why it had to be removed now?"

O'Connor says that when he showed up yesterday, the pole was still in place, but the box had been removed, and there were pieces of the sculpture "just broken and lying in the sand." Which he found particularly sad because some of the sculptures were hand made by kids at the neighborhood's Misty Forest school. He also says he spent $300 of his own money buying pieces to create the sculpture.

Steve Olson, spokesman for the Florida Department of Transportation, says that jurisdiction over that portion of Mills – aka State Route 15 – has transferred back and forth between the city and state. "Recently, jurisdiction of this road changed to back FDOT. After the transfer, FDOT communicated to the city that its property, the old camera, was in the right-of-way and needed to eventually get taken down," Olson says. "It was not a work of art at the time of that communication. Sometime after that communication, and now, somebody transformed the old camera into an artwork. What I’m told is that the city will take it down, per FDOT instructions, but the city is working to find another location to display the artwork."

Grant says that she is, in fact, working to find a new home for the piece.

"I did salvage the traffic signal box (the birdhouse) and Traffic Engineering is storing it in their warehouse until we find another location," she says. "I salvaged the birds and took them to Brendan this morning. The pole will remain in its current location - until we have a new location. The city will move the pole - put the traffic signal on top of it — and the amazingly talented and creative Brendan O'Connor will recreate Put a Bird on It somewhere else in Mills 50."

In the meantime, O'Connor has this to say about the FDOT's sudden decision to tell the city to trash his artwork: 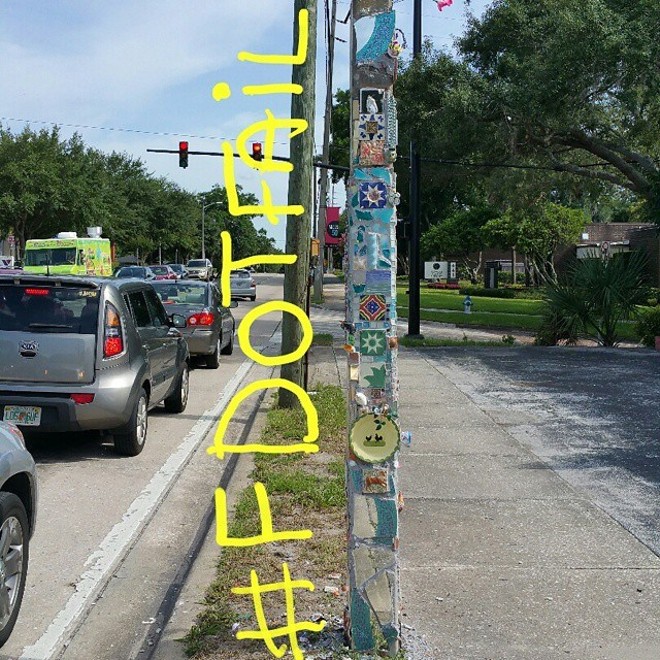 Sadly, O'Connor's is not the only piece of embattled artwork in the city this week. See this blog about why the pink bunny statue in Lake Como Park is being relocated.