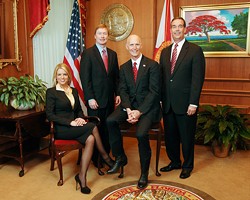 Gov. Rick Scott and the Florida Cabinet will be asked next week to approve a settlement agreement in a lawsuit that contends they violated the Sunshine Law by using staff members as "conduits" in discussions about the forced resignation of the state's top law-enforcement officer.

The mediated proposal would, in part, require Scott and the Cabinet members to forward all government-related emails from their private accounts to public accounts and to pay about $55,000 in attorney fees.

Scott and the Cabinet were sued in February by open-government advocates and media organizations seeking documents involving the abrupt departure of Florida Department of Law Enforcement Commissioner Gerald Bailey.

"We're very optimistic that this will lead to an outcome we can all accept," Andrea Flynn Mogensen, a Sarasota attorney representing the plaintiffs, said Monday.

The agreement is expected to go before Scott and the Cabinet on June 23.

Agriculture Commissioner Adam Putnam "is pleased that progress has been made and looks forward to an open, public discussion" on the proposed settlement, Putnam spokeswoman Jenn Meale said Monday in an email.

Chief Financial Officer Jeff Atwater's spokeswoman Ashley Carr said in an email, "We look forward to finalizing an amicable resolution to this case."

A spokesman for Attorney General Pam Bondi acknowledged that the settlement is expected to come up next week.

Scott's office, which did not immediately respond for comment, has denied that the discussions about Bailey violated state law.

With plaintiffs including the Associated Press, the Florida Society of Newspaper Editors, media companies, Citizens for Sunshine and St. Petersburg attorney Matthew Weidner, the lawsuit focuses on conversations between Scott's staff and aides for Cabinet members about Bailey's ouster in December.

Scott and the Cabinet have already implemented a number of the settlement points, such as requiring new Cabinet-level hires to be publicly vetted, requiring that Cabinet staff undergo annual open-records law training and requiring that all Cabinet-aide meetings be broadcast online.

The settlement also would require that all communications regarding Cabinet agenda items be conducted in writing or during open meetings and that Scott, the Cabinet and their senior staff members forward to state email accounts all public records that have been sent and distributed from their private email accounts.

"Apparently, a significant number of constituents and lobbyists were using the private email addresses to go around public-records requests," Mogensen said.

Mogensen noted that without the court-backed settlement, the policy changes approved earlier this year "could be undone tomorrow."

The policy changes were imposed after Cabinet members expressed displeasure with the abrupt removal of Bailey.