June 15, 2015 at 2:40 PM
comment
Stop the presses, because one of our nation’s most prestigious daily newspapers has made a shocking discovery. Over the weekend, the Washington Post exclusively revealed that Walt Disney World tickets are really expensive now.

Snark aside, this new WaPo article examining WDW ticket pricing ("How theme parks like Disney World left the middle class behind") has been making the rounds recently as if it contains some surprising new information or in-depth analysis. But it really just repeats the same things theme park industry watchers have been saying ever since Disney raised the one-day price of Magic Kingdom admission to $105 back in February of this year, only with the addition of some misleading statistics (and some class-war clickbait) that simultaneously make the situation look better and worse than it really is.

For starters, the article’s key graph purports to show how WDW ticket prices have changed in absolute and inflation-adjusted dollars. The starting and ending numbers, taken from AllEars.net, are more or less correct, but their presentation makes the data meaningless because the visual correlation creates the misleading impression that prices and inflation are converging, rather than increasingly outpacing each other.

A more informative metric would have to compare Disney ticket prices to the Consumer Price Index, which is a better (though still imperfect) benchmark for how badly WDW price increases have outpaced general inflation: 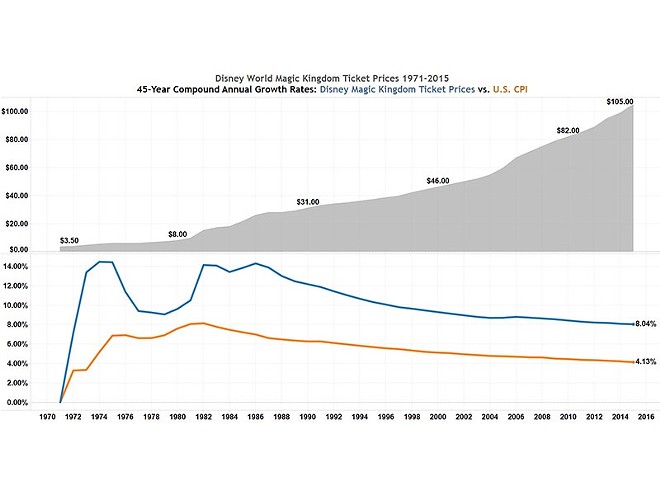 (A word of warning: The website this chart is drawn from features a good deal of economic fear-mongering, but their Disney data seems pretty solid.)

Better yet, check out this chart of WDW ticket prices vs. median household income, assembled by commentator ParentsOf4 on the WDWMagic forums.

On the flip side, while the article fumbles the figures to undersell how swiftly Disney theme park prices have risen, it misuses other data to oversell the idea that Disney’s recent increases are innovative or exceptional in this regard. The fourth paragraph howls over $115 steaks and $53 desserts, without mentioning that those dishes at Disney Springs’ new Boathouse restaurant are designed to be shared by between two and eight eaters; meanwhile, for 20 years you’ve had the option of paying five times that for a single seat at Victoria & Albert’s Chef’s Table in the Grand Floridian. Universal Orlando’s Potter-driven attendance gains are mentioned, but not the fact that their ticket prices have kept pace with every Disney increase.

Most egregiously, WaPo buries the lede by not mentioning Disney’s recent survey on seasonal pricing until more than halfway through. Borrowing a page from ski resorts and Uber, so-called “surge” or “variable” pricing schemes would categorize calendar days into tiers based on attendance to jack up ticket prices by $10 or $20 on busier days. While the invisible hand of the free market applauds (but does it make a sound?), average visitors are scratching their heads, trying to figure out whether they need a Silver or Gold ticket to meet Mickey on a Monday during a blue moon.

More than class issues, this is the real story of Disney’s market manipulations. Rather than costs driving entire demographics away (a thesis that the dollar figures simply don’t support), the increasing complexity of planning a Disney World vacation may be driving guests elsewhere regardless of price. Anecdotally, I hear from more and more former Disney loyalists who are willing and able to pay for a first-class experience, but have grown frustrated by Disney’s lack of must-see additions, especially relative to Universal. (An analysis of how Walt Disney World has decreased capital expenditures over depreciation since opening would have been welcome in the WaPo piece.) 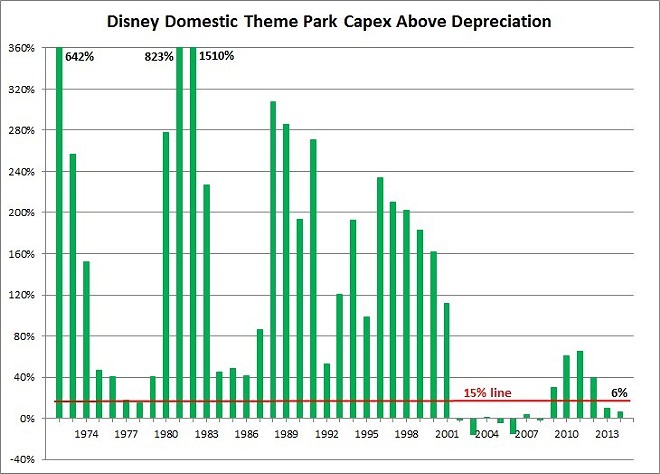 Finally, for a much more thoughtful dissection of the article’s basic premise, check out this piece from Robert Niles on Theme Park Insider. His basic point is that Disney didn’t abandon the middle class, America did. Rising theme park prices, and the relative shrug they are greeted with by visitors, might be a symptom of our nation’s growing income inequality, but it’s unreasonable to pin Mickey as its poster child.