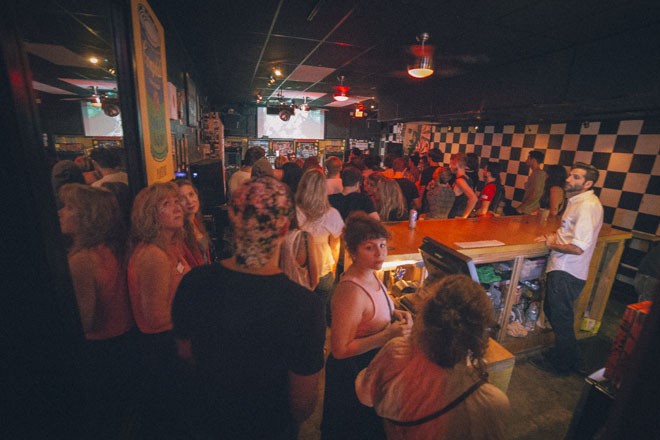 While Sportstown and Bull & Bush remain the linchpins of Milk District nightlife, if you haven't been in a while, it's also worth peering into the always-morphing Spacebar to see what color's splashing the walls lately. The bar's culture has shifted some (kinda like a bored teenager trying to find clothes that fit his awkward frame), starting out with galactic pinball machines for a BART vibe, then quickly falling in love with vinyl and supporting neat events like Bring Your Own Vinyl and Uncle Tony's Donut Shoppe pop-up shops. And while they could bring back the pinball and we hope the vinyl stays for good, the latest look the bar is sporting seems like our fickle teen decided to just wear his favorite band shirt every day. And we're cool with that. With a native PA system Spacebar's owner Tommy Mot procured to support a special Obliterati concert earlier this year and a sturdy but collapsible stage, Spacebar could be the alternative indie venue Orlando's been crying for since we lost Peacock Room.

On my last visit to Spacebar, I was there to check out local act Ark's cassette release party (June 19), and since I live nearby, I went on foot. So I was approaching from within the Milk District when a car full of goggling, tousled-haired nerds slow-rolled up to me and asked with goofy wonder, "Hey, do you know where Spacebar is?" That was my first alert that Spacebar had tapped into enough scene magnetism to draw newbies to this still-young neighborhood. I smiled politely and pointed at the bar right in front of them.

Then the tables turned as I realized I didn't even know how to get inside. Creating an even more obvious parallel to Peacock Room's much-missed culture, when the stage is set at Spacebar, they funnel concertgoers through the back where the parking lot ends up as an extension of the party (a divine people-watching opportunity, as anyone who has ever attended Body//Talk knows). From there, you enter through the narrow hallway and are dumped into the pit. The bar stays accessible despite the crowd, and it's easy to dip out the back to take a breath or find your smoking friends.

The crowd was impressively thick, and, yeah, maybe that's a skewed perspective because the bar is small, but it doesn't matter. It was hot, and yeah, there was maybe a little too much lag time between acts, but it didn't matter (Peacock Room shows used to end at, what, 5 a.m.?). It was just rad to be in the thick of a promising new performance space that hopefully bands will treat with the same affectionate imagination they had when Peacock Room exhibited the same kind of potential. Plus with Body//Talk's little brother Late Night Swim moving into Spacebar permanently as a weekly offering, there will be a regular reason to return starting Thursday, July 2.