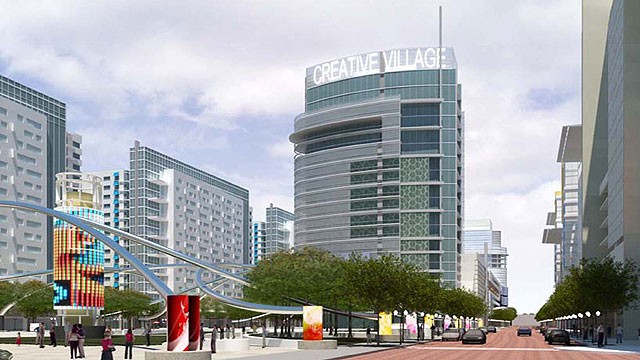 Among the big losers in this week's budget veto process were the University of Central Florida and the Dr. Phillips Center for the Performing Arts. Funding for Orlando Repertory Theater also took a hit, though not as large as the other two entities.

The governor's long list of budget vetoes, which totals $461,387,164, includes $15 million that UCF and the city of Orlando had been counting on to begin work on the school's proposed downtown campus, which is supposed to be a hub in the long-awaited Creative Village project, which comprises 68 acres in and around the area of the former Amway Arena. Planning for the downtown campus, which would offer programs in communications, visual arts, public administration, criminal justice and more, began last year. UCF originally had hoped for more than $57 million from the state to get the project moving, but state legislators ended up allotting it only $15 million in their proposed state budget. But Scott cut even that. UCF downtown provost and vice president A. Dale Whittaker wrote in a post on the campus' website today that "while we are disappointed, we are not giving up." He says that UCF, Valencia College (which was to partner in the downtown campus) and the city of Orlando "will determine our next steps, then share them in the next several weeks."

Mayor Buddy Dyer also expressed disappointment in the governor's decisions, pointing out that the campus has the potential to create lots of jobs – good ones, we'd like to point out, not the cheap-and-easy service jobs the Scott administration seems to favor – in the state.

"We are obviously disappointed, but will continue to work with our partners to develop a UCF/Valencia campus in Downtown Orlando," Dyer says. "This new campus will bring significant economic impact to our entire region, creating more than 4,000 jobs and generating $180 million in wages each year while preparing the workforce of tomorrow and transforming the future of Downtown Orlando and the Parramore community."

The governor also cut $5 million in funding for the second phase of the Dr. Phillips Center for the Performing Arts, and $150,000 for Orlando Repertory Theater.

A funny little aside: Scott also vetoed $250,000 in Medicaid fraud prevention in Miami-Dade County. Kind of telling from a guy who was at the helm of a company known for running the biggest Medicare fraud scheme in history.