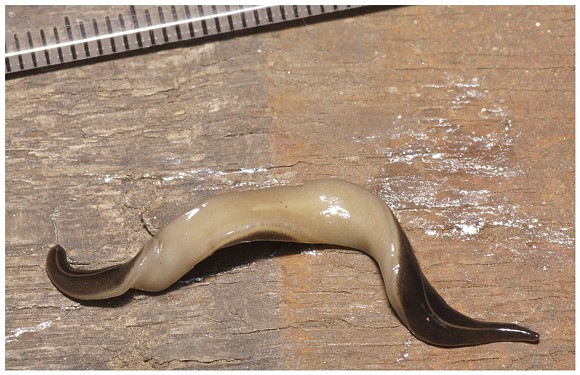 The New Guinea Flatworm, one of the world's peskiest and ugliest invasive species, has now been spotted in Florida and will likely spread to the rest of the country.

The flatworm is known to feast on local snails and earthworms, which are a vital part of the ecosystem.

Despite the fact that the 2 inch worm can't directly harm humans in anyway, they're still utterly repulsive. The slimy little freak is actually a fish and it can live on land for days because it has no natural predators (they taste so awful birds won't even eat them) and get around by pushing themselves up trees with their gross gills.

Known as Platydemus manokwari, the flatworm is relatively easy to spot. It has a dark brown body with a pale belly, which has a repulsive mouth located in the middle.

According to PeerJ, who published the findings Tuesday, June 23rd, the worm has also made it's way to France.

The Washington Post reported that the New Guinea Flatworms were likely brought in via infested soil or plant matter.