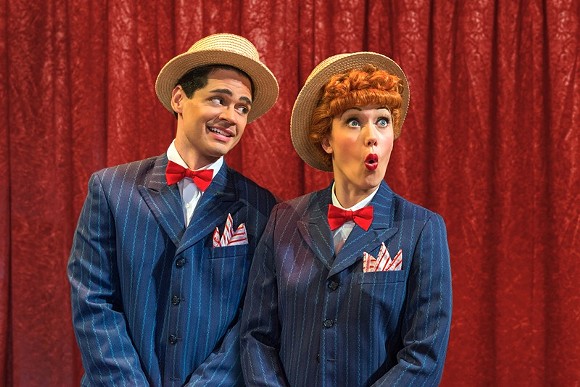 I’m a little to young to have loved “I Love Lucy” during its original run (don’t let my grey hair fool you) but I can remember enjoying its reruns on Nick at Night, back when it actually was on Nickelodeon at night. So while I Love Lucy: Live on Stage didn’t exactly leap to the top of my must-see list when it was first announced as the final show in the Dr. Phillips Center’s inaugural Broadway Across America season, I was pleasantly surprised to find it made for one of the more enjoyable evenings I’ve had in the new Walt Disney Theater thus far.

Director Rick Sparks – who adapted teleplays by Jess Oppenheimer, Madelyn Pugh and Bob Carroll Jr., with the aid of Kim Flagg – made two wise choices in staging this single-act tribute to the 1950s' favorite redhead. First, instead of trying to re-create super-iconic episodes like “Lucy Does a TV Commercial” (Vitameatavegamin!) or “Job Switching” (chocolate factory), Sparks selected the less familiar, but still funny, “The Benefit” and “Lucy Has Her Eyes Examined,” both of which present plenty of opportunities for physical comedy and music. Second, the episode re-creations are supplemented by a live host (Mark Christopher Tracy) who expertly guides us, the “live studio audience,” through a simulated filming filled with Golden Age of Television bonus features, like vintage commercials sung by the grinning Crystaltone Singers.

Of course, the conceit could seem like a sad waxworks if the sitcom stars’ stand-ins weren’t sufficient, but this all-Equity cast does a more than credible job catching the original show’s spark. Kevin Remington’s Fred Mertz was my favorite, with his wonderfully accurate Frawley growl; Lori Hammel makes a fine foil to him as Ethel, giving her all in their “Varsity Drag” dance number. Euriamis Losada has Ricky Ricardo’s look down pat, from pomaded pompadour to pearly whites, and his Babalu-ing and braying laugh need no ‘splaining. Thea Brooks also looks the part as Lucy, and employs her wonderfully limber physicality with loopy abandon. But her facial expressions occasionally edged beyond mimicry into parodic mugging, at least from the front orchestra; in the balcony, I'm sure it was exactly like watching Lucy on a 21-inch Philco tube.

For a couple of hours of inoffensive, nostalgic entertainment, I give I Love Lucy: Live on Stage my full endorsement, but it does miss opportunities to be something more on several levels. In terms of historical accuracy, the supposed re-creation of Desilu Studios is a mess; the characters point out the colorful set, when in reality it was painted in shades of gray. More importantly, we barely get a glimpse of the real actors behind the characters, even during the commercial breaks. Ricky’s womanizing is alluded to in pantomime, but we never see any of the real-life tension between Frawley and Vivian Vance, nor Lucille Ball’s backstage influence as a pioneering producer and businesswoman.

Despite these omissions, I Love Lucy delivers what it promises better than most big-name Broadway shows I’ve seen this season: It takes you back to a simpler time, gives you a few big laughs, and gets you out the door in barely two hours. What’s not to love?