Next year when you fly Southwest, Air Tran or Virgin out of Orlando International, wait till you get to the airport for lunch.

Villa Enterprises unveiled their new plans for the new Orlando International Airport food court and it has some interesting additions. The new court, in Airside 2, will include 11,100 square feett of new dining space with a large, contemporary dining pavilion. Villa won the bid in mid-April, beating out six other proposers, but waited until recently to unveil all of the details of the plan.

Seven brands will be included, four of which are proprietary to Villa and three brands proven popular in the Orlando market. Villa’s brands will be Villa Italian Kitchen (a quick Italian option serving pizza and other Italian favorites), a Green Leaf’s & Bananas combo (a salad, smoothie and fro-yo option), and the Market by Villa (a fresh food grab-and-go option). The other additions are Jersey Mike’s Subs, Asian Chao Oriental Eatery and a Chipotle. The Chipotle will be only the fifth airport location in the world for the fast-casual burrito chain. 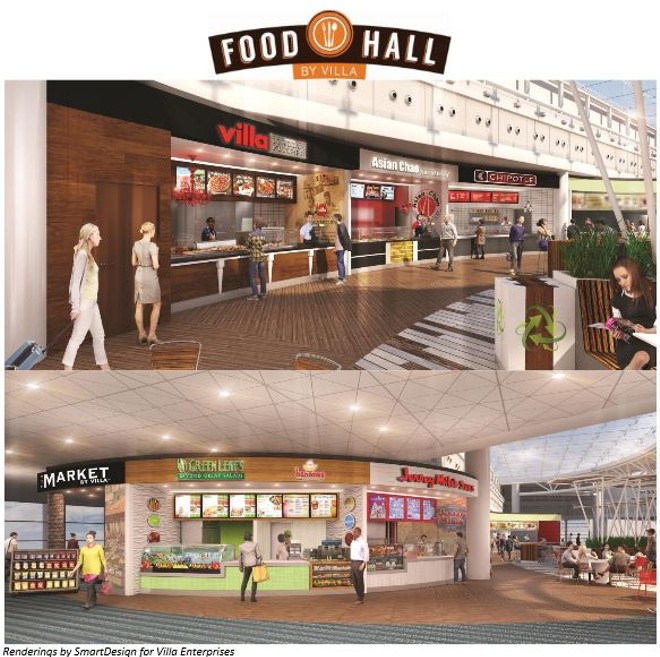 The new food court is designed by SmartDesign Group, the famed international design company behind numerous award-winning airports. SmartDesign is behind the major overhaul that is currently taking place at LAX. They also were the head design group for Incheon International Airport, which often ranks as one of the top three airports globally and home to the highest airport duty-chipotlefree revenue in the world.