On Saturday, July 4th, while most of us were out celebrating or Nation's birthday, four masked suspects robbed a Golden Corral and its employees at 11:30 p.m.

The robbery went down at the 2328 S. Semoran Blvd location.

According to OPD, the robbers stole an undisclosed amount of money from the till and personal property from the restaurant's patrons and staff.

One of the suspects fired off two shots, one injuring the manager, who is now in stable condition. UPDATE: It was originally reported that one of the shots hit the manager. The manager was actually startled by the gunshots and broke his ankle.

Apparently, security cameras were only able to capture footage of one of the robbers.

Anyone with information as to the identity of the suspects, are asked to call Crimeline at 1-800-423-TIPS. 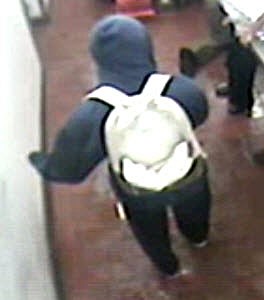