Growlers are legal! Now what's a growler — and where can I get one? 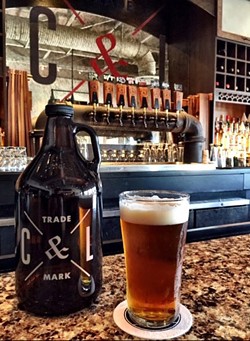 Now that the Florida Legislature has made it legal for beer brewers to sell 64-ounce growlers, craft beer lovers are rejoicing. But those who are more casual beer consumers might be wondering a) what's the big deal and b) how to join in.

Very briefly, a) the big deal is that by filling a growler (a glass 1/2 gallon or 2-liter jug that can be filled with draft beer), consumers can get the freshest possible brew from local brewers, without the consumer having to drink it on premises or the brewer having to package it for retail sale.

As for b), in cities where the sale of growlers is more established, brewers keep growlers on the premises and either charge for the container separately or charge a deposit fee, allowing for reuse. Since this is such a new phenomenon in Florida, however, many beer sellers don't have enough to go around.

We spoke to the friendly folks at Hearts Homebrew this morning, who told us that technically, a brewery can fill any container of the correct size. (So if you want to be ratchet and bring in a milk jug or a 2-liter soda bottle, by all means ... do that.) Of course, a glass bottle with a proper airtight top will hold the carbonation better, and a good handle will make pouring easier.

You can buy glass growlers at Hearts Homebrew (6190 Edgewater Drive) or at the Sanford Homebrew Shop (115 Magnolia Ave., Sanford) for anywhere between $5 and $30. (A brewer will generally charge $12-$15 for their own branded containers.) As Luke at Hearts pointed out, the passage of this law may have caught glass manufacturers unawares, so it may be a bit before brewers have their own growlers. If you want to jump right in, it's not a bad idea to be prepared with your own.

Here's a decent list of Florida craft breweries, though it doesn't include locals like Cask & Larder, Redlight Redlight (who told us today that they will start selling growlers soon: "Give us a few days"), or coming-any-day now Ten 10 Brewing Co. or Broken Strings Brewing.

UPDATE: Here are some helpful suggestions/comments from awesome readers on our Facebook page: