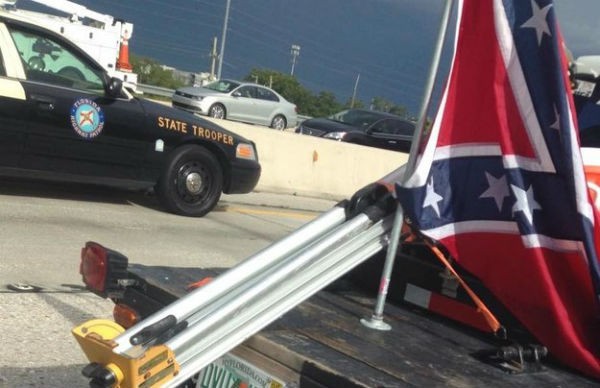 Welcome to another episode of WTF Florida, where we ask the important questions, like WTF, Florida?

In today's episode, we have two men who feel so passionately about a piece of fabric they were willing to follow another man onto the freeway for it, beat him and threaten to kill him, according to the Orlando Police Department.

Phillip Arroyo told OPD officials that he was driving in downtown Orlando Monday when he came to a red light next to a white pickup with a HUGE Confederate flag attached to the back.

According to the police report,

“Arroyo states that the front passenger in the pickup looked at him and said, “What the fuck are you looking at?” Arroyo stated he responded “I don’t appreciate the language by the way that flag you’re having represents hate.”

(Sidenote: Is there any proper etiquette for stoplight conversations?)

When the light turned green, Arroyo continued onto Interstate 4, but the terrifying episode did not stop there. The men in the truck, Jonathon Wayne Kaley and Kenneth Ray Sturtz, followed Arroyo onto the freeway, swerved in front of his vehicle and hit the brakes.

Arroyo was forced to stop abruptly and watched as the two men got out of the truck and came toward him. Arroyo told police Kaley hit him through the window, and said after he rolled the window up, Kaley continued to punch the window. Both men yelled they were going to kill him.

Kaley and Sturtz both told officers that Arroyo had told them they were racist and that he didn’t like the flag. They said Arroyo swerved in front of their vehicle, which caused them to hit the brakes. Kaley denied striking Arroyo.

Apparently, Kaley’s story was not so convincing because OPD officials said in the report that they would file charges on Kaley for burglary of a conveyance with battery to the State Attorney’s Office.