The first label showcase tour for pioneering area music label Illuminated Paths just wrapped with a finale event (July 5, Will's Pub). A much more elaborate production than the tour kickoff (June 21, Uncle Lou’s), this homecoming show reconfigured and outfitted the rock club with rows of chairs and a giant video screen in front of the stage to become an ad hoc theater.

The setup was apt since the headlining feature was Film Speak, the audio-visual project by Broken Machine Films (video artist and IP label boss Joshua Rogers) and local experimental musician Maximino that premiered at the conceptual music monthly the In-Between Series back in March. Reversing the arrangement of that debut performance, Maximino was situated behind the screen to create an experience that this time emphasized the ambience of Rogers’ live-mixed, lo-fi, nouveau-psych visions. This optical prominence made the important visual side of Illuminated Paths itself a central feature, an element that persisted throughout and defined the event.


The only act to go in front of the curtain was Trotsky’s Water Cooler, the solo noise vehicle for Orlando musician Dan Reaves (of Moonmen From Mars, the Rot Guts, among others). The best live noise acts go beyond basic electronic doodling (snore) and dive into more visceral waters with real hardware or performance art, both if you’re really lucky. On that count, check and check. With an arsenal that was part device and part scrapyard, Reaves wove haunting, escalating soundscapes that relied as much on a sheet of corrugated metal as it did electronics. The floor performance began with all “instruments” neatly laid out on a table. By the end, the artist was strapped to the metal sheet with duct tape and punishing it with heavy gauge chain, the entire transformation occurring without a sonic pause. 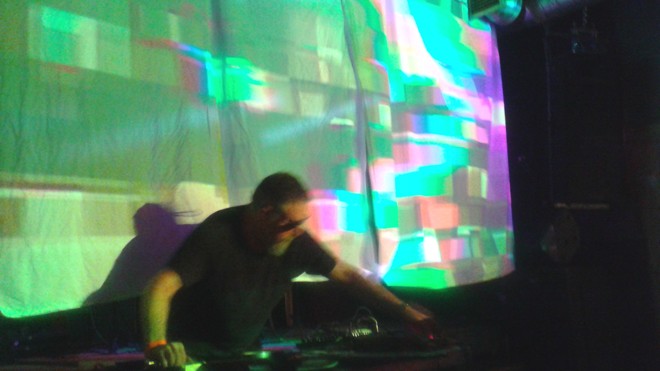