UCF is now dealing with an unofficial, 'no rules' party frat called the Gazoni Family 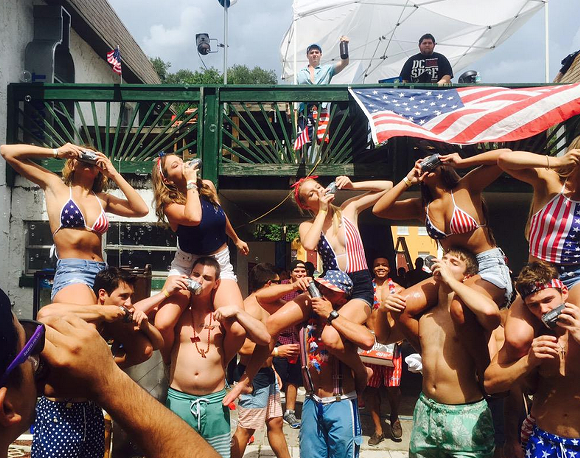 Back in January, the University of Central Florida washed its hands of the Lambda Chi Alpha fraternity, stripping the organization of its charter and affiliation with the school.

But like a weird, new rash after a regrettable night of drinking, it seems this frat isn't going anywhere.

According to the Huffington Post, Lambda Chi Alpha, who had its charter revoked for multiple instances of misconduct, has reemerged as an unstoppable "no rules" party force called the Gazoni Family.

"We ultimately decided to persevere and not tolerate getting bullied by umbrella organizations such as Greek Council, UCF and Lambda Chi Nationals any longer," said Yuval Mor, the acting president of the Gazoni Family to HuffPost. "We organized ourselves back together merely days after our dismissal from the institution. That is basically how it started."

Over the past few months, the Gazoni Family, which is named after some legendary frat member of old, has positioned itself as a frat that can successfully operate outside the rules of the school and its party-hating restrictions, you know, sort of like the movie Old School with Will Farrell.

Evidence of this can be found on the Gazoni Family Twitter feed, which is is a flood of party fliers, jabs at the school's Greek Council and reasons why joining "The Family" is way better than a traditional frat—like no mandatory dry periods, rush restraints and unlimited social functions...

And now @GazoniFamily takes a shot back @UCFGREEK, celebrating "independence" from #UCF and its "Circus Court." pic.twitter.com/Gk29fzCddz

Apparently, the school can't do anything. Since UCF is a public university, the school cannot ban a student from joining a private organization. Plus, the school doesn't own the house the Ganzoni Family operates out of.

"The UCF chapter of Lambda Chi Alpha had its charter revoked earlier this year for behavior that does not reflect the values of the national organization. said UCF spokeswoman Zenaida Kotala in a statement to Orlando Weekly. "UCF supported that decision and does not recognize Lambda Chi Alpha as a registered student organization, including a small group of students formerly in the chapter who call themselves the Gazoni Family. We do not approve or support the online material used to promote this unregistered group of students."

Mor told HuffPost that the Gazoni Family isn't trying to portray themselves as "rebels" or disrespect the school in any way, "Our product is just simply better," he said. "We have the right to assemble, and are taking the proper due diligence just like any other registered organization to prevent any issues from both a safety concern and a legal standpoint."

The Gazoni Family is holding a Pool Rush party on July 18th, but you have to be in college to attend.