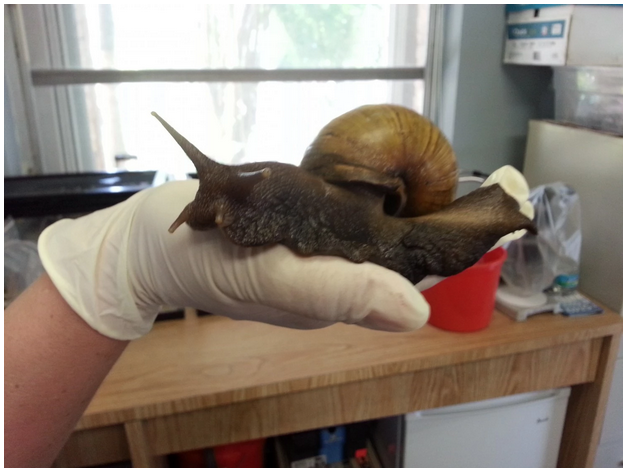 It might be time to salt the earth.  Researchers are claiming Giant African land snails are spreading from South Florida and are carrying way more dangerous parasites then previously thought.

A recent U.S. Geological Survey published in Journal of Wildlife Diseases, says previous research on Giant African land snails grossly underestimated how many of them are carrying rat lungworm, a parasitic worm that burrows into humans and can cause meningitis.

USGS biologist and lead researcher Deborah Iwanowicz discovered the parasite increase by taking multiple tissue samples from the snails—as opposed to previous studies led by lazy scientists who only took one sample, from one part of the snail's body.

“Collecting just one additional sample per snail increased the number of snails testing positive for the rat lungworm by 13 percent," said Iwanowicz to the Washington Post.

Native to East Africa, the giant snails were naively introduced in South Florida as pets in 1966. According to the Washington Post, they were nearly eradicated back in the '70s, but are now making a resurgence in the Miami and Ft. Lauderdale areas.

Compared to Florida's long list of invasive species, the Giant African land snail is one of the most resilient. It can switch sexes and drop over 400 eggs a year. It can decimate crops by eating over 500 varieties of plants. And, it can lay dormant for a couple months if it has to.

All hail our soon-to-be snail overlords.