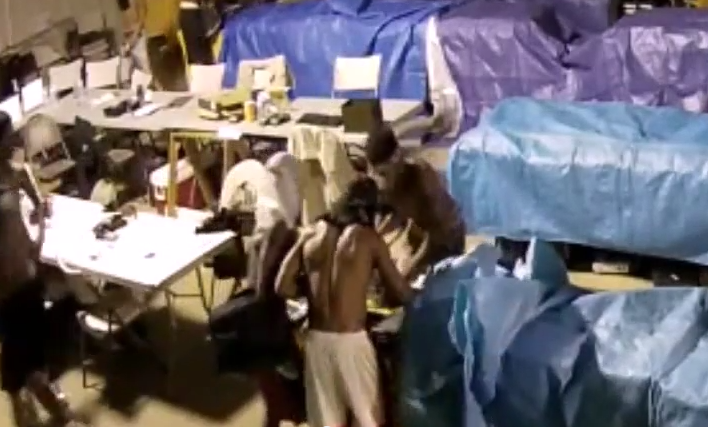 Here's some disturbing video of a bunch of people breaking into the Central Florida Fairgrounds to steal some guns before a gun show that took place there July 4 weekend.

According to police, at 2:45 a.m. on July 4, about half a dozen shirtless men broke into a room where the guns were stored. They raided the tables and made off with as many weapons as they could.

A state trooper was on duty to guard the location when, according to a narrative released today from the Orlando Police Department, the officer "heard a smashing sound" and saw "approximately two or more shadows in the distance." He tried contacting the vendor, Shoot Straight, but couldn't get in touch.

Orlando police were called to the scene, and when they arrived, they found a backpack with a name written on it and a sword in the woods.

The report didn't say how many guns were stolen, but judging by the video, below, we think it's safe to say it was a bunch.

UPDATE: Police now say 24 guns were stolen in this robbery. A press release sent by the Central Florida Fairgrounds says that the OPD and ATF were able "to recover a good portion of the weapons stolen." The fairgrounds also states that it had three overnight officers in the building, as well as 13 surveillance cameras on hand to keep an eye on things. During the day, up to 20 uniformed and undercover officers were in the building, too.

"We are happy that no one, law enforcement or suspects, were hurt, and that while a portion were recovered in short we understand that they are currently working to secure the outstanding items," says William Lee Price, director of marketing and operations for the Central Florida Fairgrounds, in an email about the incident. "Lastly, in the 26 years the Fair has hosted a gun show this is the first time anything this brazen has occurred."

Price says that additional security measures have been put in place to prevent this kind of thing from happening again.

"Both the Fairgrounds and the promoter take security seriously, and we are adding additional security measures (metal interior roll up doors) before the next show, which is a significant investment for a not for profit like us," he says.