That insane Baldwin Park Publix brawl was over a shopping cart 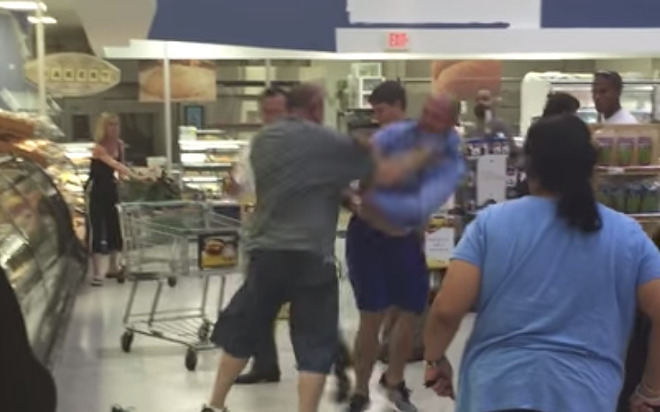 Apparently, the most "World Star" brawl to ever go down at a Publix grocery store was all because of a shopping cart.

According to OPD, the fight occurred around 5:30 p.m. July 13 at the Baldwin Park Publix, and started because a pregnant woman's shopping cart was blocking a man from pulling into his spot.

Here's what happened, according to Officer Straw, who arrived at the scene shortly after the incident and was able to get a statement from the guy who couldn't pull into his parking space, Maitland resident Edwin Colon:


Orlando resident Donna Bankstahl witnessed the fight. She told police she saw Colon yelling at the pregnant female, and he told her to "mind her own business."

According to the report, Bankstahl was also waiting in line at the deli when the fight broke out between Colon and the angry husband. "While waiting in line, Bankstahl witnessed the pregnant female's husband walk into the store toward the deli line where she saw Colon ordering his food. When Bankstahl turned around to get a second look, she saw the pregnant female's husband and Colon fighting on the ground."