It's World Emoji Day: Challenge yourself to make dinner with an emoji recipe 🍆🍅🍝🍞

It's #WorldEmojiDay! Still no #TacoEmoji, but I'mma shake that off, make 🍄🌿🍝 for dinner or maybe get some 🐙 at @TxokosKitchen

You may be used to seeing the eggplant used to signal something else, but as Freud said, sometimes an eggplant is just an eggplant.

Unicode's greatest invention is the tiny characters called emoji, which make life worth texting (not that we have strong feelings or anything), and they totally deserve their own holiday. But there's not a lot you can do to celebrate World Emoji Day other than "emojify yourself" with makeup (horror 💄🙅) so we say you should make some practical use of them.

Twitter recipes aren't new, but cooking from 140 characters got a lot easier when we all started using emoji instead of typing out "octopus" or "spaghetti" or "birthday cake" or "bento box."

Earlier this year NPR cooking blog The Salt focused in specifically on taking back the eggplant from its phallic co-opters with a trio of eggplant recipes, from Chinese to Japanese to Italian. (That's their eggplant parm sandwich in the headline.) Over at The Kitchn, you can take an emoji recipe quiz – not easy unless you're a rabid Kitchn follower, but give it a whirl.

And in news that makes us love this world we live in, the New York Times has announced that you can now search their recipe archive using emojis – a search for 🍝  brought back 141 spaghetti recipes, and 🇪🇸  got us a whopping 289 Spanish recipes. 💩  brought zero results, though the site did amusingly refer to what Unicode calls "pile of poo" as "hankey." And below is Bon Appetit's epic text version of their recipe for fried shrimp rolls. 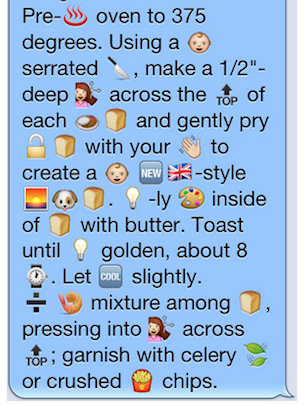