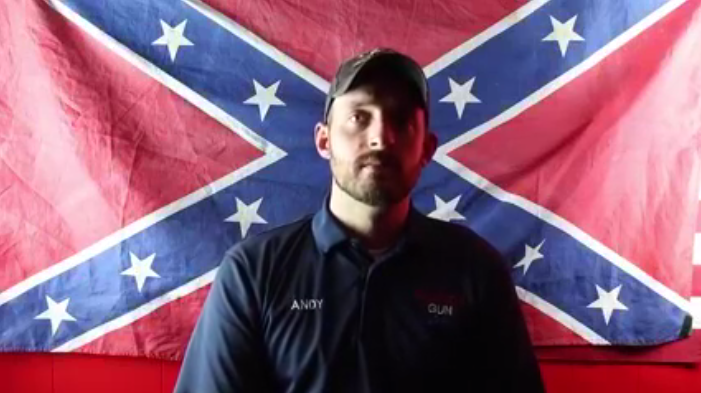 Andy Hallinan, the owner of Florida Gun Supply in Inverness, Florida, posted a video last weekend to his business's Facebook page announcing that effective immediately his store is now a "Muslim-free zone."

Hallinan claims the new policy comes after the recent Chattanooga shootings. "Our leaders are telling us that islam is a peaceful religion, full of love and tolerance and hope. Don't believe their lies," says Hallinan while sitting in front of a Confederate battle flag. "We're in a battle patriots, but not only with Islamic extremism, we're also in battle with extreme political correctness that threatens our lives– because if we can't call evil evil, for fear of offending people, then we can't really defeat our enemies."

Unsurprisingly, Hallinan's video was met with a mix of anger and support. The Council of American-Islamic Relations is calling for the U.S. Department of Justice to investigate federal civil rights violations at Florida Gun Supply, as well as another gun store in New Hampshire.

Since there's no way to efficiently ban Muslims, one can only assume Hallinan plans to ban anyone who "looks Muslim."

However, besides banning Muslim-like people, Hallinan also announced that he's offering free conceal and carry classes and free use of his gun range– of course, only for "patriots."

"Take this opportunity to get armed, get trained and carry daily," said Hallinan, a man who owns a gun store and wants to sell more guns.

So far, Hallinan hasn't said whether or not he will ban white guys after the mass shooting at a Charleston church on June 17.

4 Marines and a Police Officer Shot: Time to Unite!

Due to the latest attack by an Islamic Extremist in Tennessee, we've made some extreme changes to the way we are impacting our community. Watch to see our 3 new changes that will make America a safer place to live. Please share.