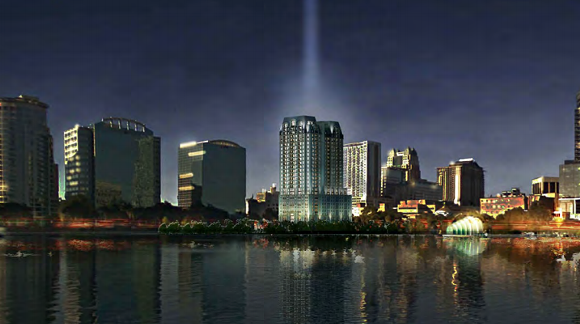 Orlando’s Municipal Planning Board unanimously approved plans for a 28-story tower near Lake Eola Park Tuesday, despite crowds of residents protesting its impact on neighbors and the lake.

The building, which would replace two historic buildings on East Central Boulevard, plans to house 215 residential units, an area for commercial use and a parking garage. Although the plans were approved by the municipal board, they still require final approval from Orlando’s City Council.

At least 100 members of one of Orlando’s oldest social clubs, the Rosalind Club, and others filled Council Chambers at City Hall to let the board know their concerns. The skyscraper, proposed by a Chicago developer, would be the club’s direct neighbor.

Karen Consalo, who is representing the Rosalind Club, says the club members' concerns with the building include encroachments on the park, increased traffic, the height of the building, increased crime, construction damage and losing the view of Lake Eola from the Rosalind building.

“We are in favor of programs and developments when it benefits the community,” says club member Eugenia Sefcik. “... But we do not believe this project should be approved as recommended.”

Save Lake Eola Park, a group protesting the project, said on its website that the city would give public park land to the developer, land that was originally deeded to the city from Cathedral Church of St. Luke on the condition that it would be used as “public park only.”

City staff and the developer’s representatives say the developer proposed outdoor seating, a water well and landscape improvements to the land as a donation, but would not own the land.

“If we’re not able to use the area, we can leave it in its current condition,” says Micky Grindstaff, a representative for the developer. “We can live with that ... it just seemed like a better plan for this portion of the park that’s the least active.”

Grindstaff also said the developer has met with the Rosalind Club in the past year to discuss the project, and seemed to have come to an agreement until last week, when they were given new demands by the club, including parking spaces for their members and money for a sun porch.

A high point during the hours of testimony was when project opponent Shellie Stocksdale pulled out her harmonica and belted a song dedicated to Lake Eola, sung to the tune of “Oh Shenandoah.”

Other opponents to the project also included building preservationists and local environmentalists.
“We’re watching closely as downtown turns into a cement paradise,” says John Wild, representative of the group the Eco Guys. “I’m sick of it. ... I’m not opposed to the building, but we need to make sure this does not destroy the beautiful oasis we have in this concrete jungle.”