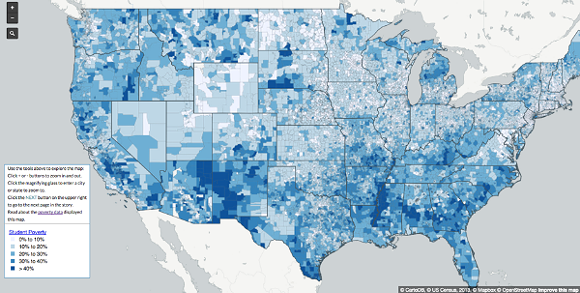 Orange County parents: Ever wondered why, oh why, neighboring schools in Seminole County are so much better? The map above shows exactly how the public school system's dependence on property taxes affects your child's school quality and encourages the divide between rich and poor communities.

Created by EdBuild, the interactive map displays student poverty levels using U.S. Census data on more than 13,000 school districts in the nation. EdBuild founder Rebecca Sibilia told the Washington Post that "gerrymandering is as much a problem for kids in public schools as it is for voters...boundaries are drawn to contain poor families rather than to favor a certain political party."

The poorest school districts in Florida include the Putnam, DeSoto and Gadsen County School District, with over 40 percent of their students in poverty.

"This system ties school budgets to the value of local property wealth and incentivizes boundaries between upper- and lower-income communities," EdBuild's website says. "Intentional or not, these invisible walls often concentrate education dollars within affluent school districts, and ensure that low-income students are kept on the outside."