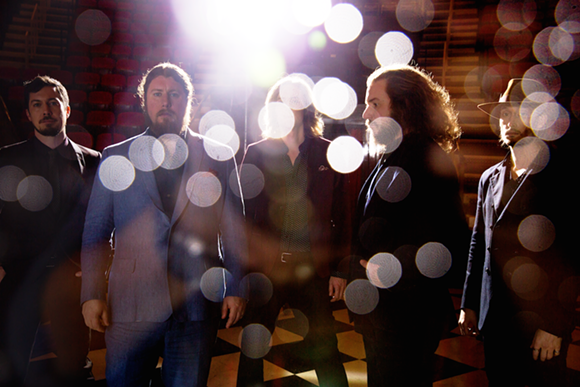 “We wanted to have some kind of project or initiative to go along with the launch of the new record,” explains keyboardist Bo Koster, a Lakewood native, in a phone interview. “We want to raise awareness and we’re taking money from ticket sales and giving them to specific organizations. We’ve always wanted to give back and we feel lucky to play music for a living and feel like it’s our duty as people who have the time and voice and capacity to make a difference. This project is our next step forward. We’ve been doing it for a long time. It’s a way to make it a little bit bigger.”

The band recorded the album, its seventh studio effort, at Stinson Beach, Calif. An old black-and-white photo of Yosemite’s Vernal Falls became the record’s cover art. The album of mid-tempo rock songs commences with the proggy “Believe (Nobody Knows)” and includes the catchy single “Big Decisions,” a song with a spectacular vocal performance that comes courtesy of soulful lead singer Jim James.

Even though the album is connected to a cause, Koster says the band didn’t intend to make a concept album.

“I think the human brain loves to find a pattern,” he says. “You could find a lot of common themes if you go through the record and if you dig deeply enough. [James writes about] struggling with love and relationships and the ending and beginning of those things. His lyrics are about existential crises and wondering about the meaning of things and the meaning of life and the meaning of love and what our time on earth is supposed to be. That kind of thing. It’s been a common theme in the lyrics and stuff we talk about in the band. There’s a line in the song ‘Compound Fracture’ that [speaks to activism]. It goes, ‘There’s no evil, there’s no good, only people doing as they should.’”

The band cut the songs in a couple of long sessions in California, two or three weeks in Portland and then two short sessions in Louisville.

“We had so many songs,” says Koster. “We recorded maybe 24 songs. We spent a lot of time on it, but we did a lot of work and had two records finished by the time we were done.”

The band intends to put out half of the tracks that didn’t make the cut on the new album on the next studio album. While recording, the guys didn’t initially think about which songs would be on which album.

“We wanted to make a song the best we could and not think about whether it would be on the record,” Koster says. “That can stunt you. We tried to stay in the moment and not judge it. If you’re in the studio judging your work, it’s not conducive to making good art. We had a couple of listening parties and tried to whittle it down to the best record we could make right now. We had games where we all picked 10 songs to see where everyone’s favorites were. We started shaping the record there. Once we did that, we had the top 14 that were contenders and related to each other in some shape or form. It was arbitrary and then Jim had another song, ‘Believe (Nobody Knows),’ which really started to solidify things for everyone. It was like making a puzzle as we kept whittling away at it. That was the last piece of the puzzle – ‘Believe.’”

The music features the same mix of rock, pop and psychedelic rock you find on other MMJ albums.

“I wouldn’t say we were going for anything,” Koster says when asked about the band's approach. “That’s like not being in the moment. You can’t control your artistic process. It never works. It does what it does on its own. We’re always trying and open to doing things that are fresh. We don’t want to go over old ground. That’s not exciting to us. It doesn’t make any sense. You don’t want to tell the same story over and over again and make the same sounds. That would be boring. If it’s not boring for us, hopefully, it won’t be boring for the listener.”

James sounds particularly soulful on “Big Decisions,” a song that Koster says was reworked and “recut.”

“The first time we cut it, it was slower and more ethereal,” he says. “We decided to put more guitars in there. It was a live vocal. Jim’s great at getting these emotional takes in the studio. God bless him. Often, we’re just learning the song or getting comfortable with the tempo and hearing it in our headphones and learning our parts and he’s given three or four really emotional vocal takes that we lose because the band isn’t ready yet. When we recut the song, we all knew it and were ready to play right out of the gate. The vocals were the first or second take."

Given the fact that the band’s catalog is so extensive, picking tunes to play for the current tour hasn’t been easy.

“We’ll play a lot of the new record, which will be cool,” says Koster. “Most people like the new record and they’re excited to hear the new record. That’s nice. We’ll try to weave in the old stuff as best as we can. It’s tough with how many records we’ve made. There are a lot of different fans and hopes for what we’ll play. We try to keep it fresh. We’ve been doing no repeats. At a festival in Mexico, we did three nights with no repeats. That’s like 90 songs. With the new record, we can do even more. The main problem is that we won’t have enough time. For us to really give a good show and show the full breadth of what we can do, we need a good chunk of time. At the core of it we’re just a bunch of guys who love music and love playing. Those guys will always be in us. We’re like our 14-year old selves, freaking out on stage and air guitar-ing in our bedrooms.”