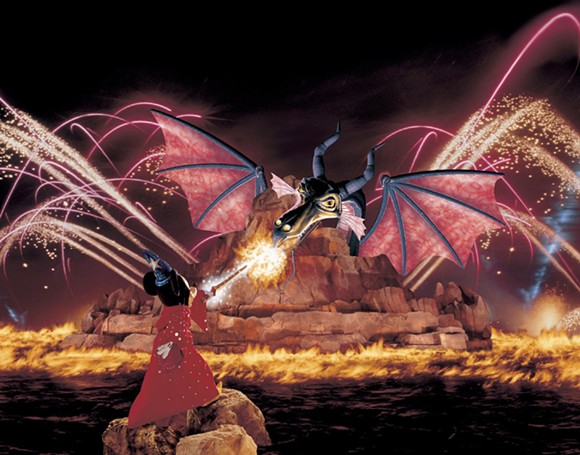 Fantasmic! at Disney’s Hollywood Studios tested different versions of reserved seating over the past week.

The seating test focused on three different variants; reserved seats, reserved rows and reserved sections. The big issue with Fanstamic! is the popularity of the show means that many people line up hours before it to grab a good seat. Even with the expanded seating that Disney built a few years ago, the show still fills up. The reservation system allowed guests to show up around 30 minutes before showtime and be seated. This means the guests would be able to spend more time within other parts of the park.

This summer, Disney's Hollywood Studios has also been running the Frozen themed fireworks show on select nights. Both Fantasmic! and Frozen have proven to be popular. Fanstamic! currently is an option for a FASTPass+ reservation. During the reserved seating tests it was not included in the advanced FastPass+ system.

The show was also updated late last month with new digital projectors. The new projectors give the ability to easily replace projection scenes during the show. The first new addition to the show is a quick Frozen ‘bubble.’ The music itself remains exactly the same.

While most shows at Walt Disney World feature FASTPass+ seating and/or up charge ‘dessert party’ options reserved seating for a regular show is quite rare. Early results from those visiting Fantasmic! point to the row and section reservations being the most successful.