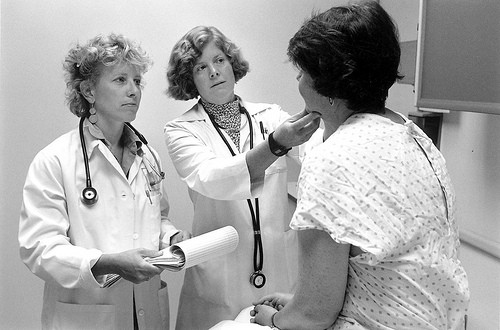 In the style of Nicki Minaj and Taylor Swift, 2016 presidential candidates Jeb Bush and Hillary Clinton got into a Twitter beef Tuesday over women’s health funding. The feud arose after Bush’s comments at a Southern Baptist Convention suggested that women’s health issues were overfunded.


After this comment, Democratic candidate Clinton pulled a “no tea, no shade” move and tweeted:


Bush replied to Clinton about an hour later, saying:

.@HillaryClinton what’s absolutely, unequivocally wrong is giving taxpayer $ to an org whose practices show no regard for lives of unborn

Along with his attempt at a clap back, Bush also backtracked from his original comments and released a statement on his website saying:


“With regards to women’s health funding broadly, I misspoke, as there are countless community health centers, rural clinics and other women’s health organizations that need to be fully funded. They provide critical services to all, but particularly low-income women who don’t have the access they need. I was referring to the hard-to-fathom $500 million in federal funding that goes to Planned Parenthood – an organization that was callously participating in the unthinkable practice of selling fetal organs."


Planned Parenthood has recently come under fire for a series of viral videos that allegedly showed the organization's employees discussing the sale of fetal tissue and organs. Planned Parenthood has denied these allegations, according to the Washington Post, saying it transfers aborted fetal tissue to research facilities and only accepts payments for transportation and other logistical costs allowed by the law.

After the videos surfaced, Gov. Rick Scott ordered inspections of all 16 Planned Parenthood facilities in the state. On Wednesday, the state Agency for Health Care Administration announced it found three facilities performing second trimester abortions without a proper license and one that has kept proper records on fetal remains. The agency did not find evidence that organs were being sold illegally in Florida, the Tampa Bay Times reports.