Local artist SKIP asks: Have you seen my banana?

If you attended last month's Cardboard Art Festival, you saw it: a gigantic yellow banana constructed by B-Side Artist SKIP. Titled “Franchise: El Tercer Mundo,” it was not, as we had originally hoped, a Velvet Underground tribute; it was a political statement on the exploitation of the worker (note the poor squished Chiquita lady under the behemoth fruit). Now it's gone – possibly stolen.

We'll let SKIP narrate the dramatic saga of its disappearance:

Following the closing of the exhibit, the large banana and assisting props and fruits were dismantled, boxed up, removed and loaded atop a matching blue pickup truck, then tied down with cautious precision and absolute care. Unfortunately, SKIP did not know at that time that all his careful efforts would be wasted, as only a couple miles down the road awaited a surprise rain storm that could not be avoided or escaped from.

As the mammoth banana fixed to the roof soaked up the falling buckets of rain, the position of its stem disabled the truck’s windshield and created impossible and unsafe driving conditions. Seeking shelter and relief from the storm, teambanana wound up in Wadeview Park next to Boone High School, and waited there beneath a playground pavilion with a ruined banana that was three times the size of an average adult male and covered in wet cardboard. The hope was that the rain would eventually stop or least settle to a point where driving without windshield wipers could be possible, but it never did. As time passed, and SKIP’s imminent work shift start time approached, the decision was made to leave thebanana there temporarily beneath the pavilion overhang, and to return to retrieve it later that evening.

Upon their return, team banana discovered that the banana was missing! An object too big and yellow to miss or misplace had vanished, with nowhere to be found. Dumpsters were dived into and the grounds were scoured, yet there was no trace of the big yellow banana.

SKIP is asking for the help of the local and online community to spread the word of the missing art piece, and assist in the hopeful discovery and return of his big banana.

Thank you for your consideration.


If you have any leads on the whereabouts of the 18-foot-long sculpture made from more than 100 square feet of cardboard, contact SKIP at the email address listed below or post at facebook.com/haveyouseenmybanana; a reward is offered for its safe return. 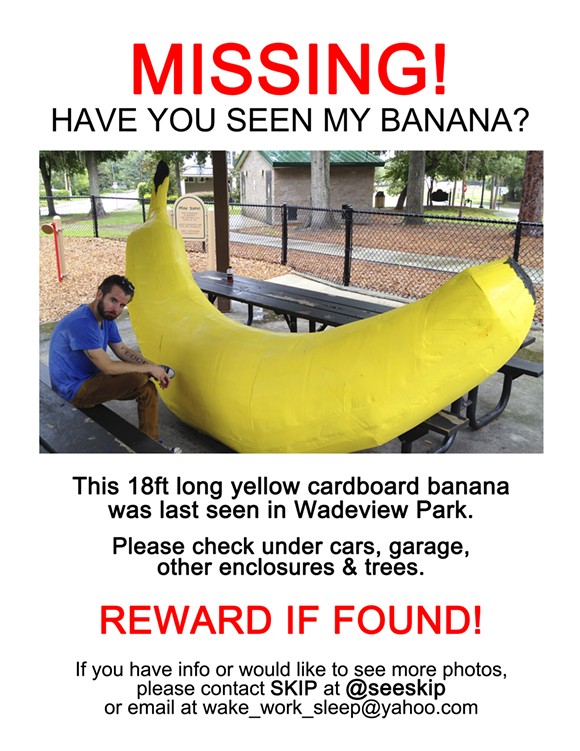