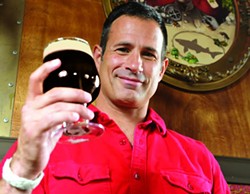 Because who DOESN'T want chocolate and crustaceans in their pint?

We kid, we kid. This month you can drink like a choc star at World of Beer, which has exclusive rights to Dogfish Head's oyster stout-style Choc Lobster. This is the first time Dogfish Head has sold Choc Lobster outside their own breweries, so kiiiind of a big deal. It's in selected WOB taverns across the country, including Orlando's UCF, Dr. Phillips and downtown locations. Most taverns are tapping their kegs Friday, Aug. 7, but supplies are limited.

Choc Lobster was originally brewed to pair with a chocolate lobster bisque and white chocolate lobster salad slider. Sam happened to be at that dinner and got a real kick out of the beer, so we decided to brew a big batch for the pub so everyone else could try it. A while back, Dogfish Head brewed an oyster stout for a film festival. However, due to a terrible storm, the film festival was canceled. Sam and his team were left with a LOT of oyster stout to drink. To say they were tired of oyster stouts would have been an understatement. So this piqued their interest in other crustacean options! Sam was familiar with Five Island Lobster Company from his summers in Maine, and while on a hunt in Tanzania, Sam got the idea to use bold fermenting ingredients such as cocoa; the basil helps the bold taste from the cocoa and the delicious lobster blend together in euphoria.


This may be one for the TRUE craft-beer enthusiasts and thrill-seekers only; I can't wrap my head around shellfish-basil-chocolate beer, but hey, it won the Great American Beer Festival’s Silver Medal in the Indigenous Beer category in 2014. (It's a lot less weird than this.) If you try it, let us know what you think.