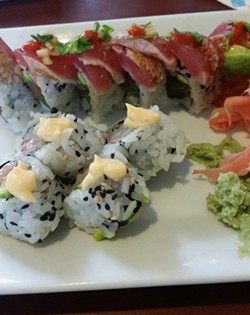 The space at 100 South Eola Drive hasn't been kind to its tenants. In fact, it's chewed up and spit out a number of high-end eateries, from Graze and Prickly Pear to Mingos and Lotus.

Now comes word that Oudom's Thai & Sushi, which already has restaurants in DeLand and Mount Dora, will take a stab at reversing the curse. They're currently hiring servers and bar staff, with an opening slated for Aug. 24.

Judging from the menu at their DeLand restaurant (which they plan to replicate here), diners in Orlando can expect a sizable bill of fare (Oudom's Thai menu; Oudom's sushi menu); judging from their website, they are more focused on the kitchen than on glam branding, which seemed to be the opposite priorities at some of those earlier failed South Eola restaurants.

Forgoing contemporary fare in favor of a populist cuisine like Thai might just be enough to vex the hex – and they plan to stay open until midnight, also an attractive prospect. Stay tuned as details become available.