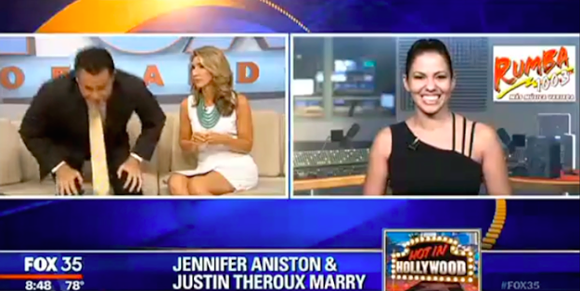 It all started last Friday, when Brown refused to discuss Kylie Jenner's new rabbit named "Bruce," claiming it's a "non-story."

“I’m having a good Friday, so I refuse to talk about the Kardashians today,” said Brown. “I don’t care! I’m sick of this family, I can’t take it anymore! It’s a non-story!”

Brown later posted the video on his Facebook page and said "Sorry, I lost my mind a bit, although it was partially in jest! I did feel better though after I was done though."

Kaufeldt then joined the folks at The News Junkie and claimed the meltdown was complete malarky.

"It was a total setup...in the commercial break right before he goes 'OK,' pats me on the leg, 'when we start doing the Kardashian story, I'm gonna walk out, OK?" I'm like, 'Oh, OK.'"

News Junkie host Shawn Wasson then replies,  "So, it was fake?!" Listen, every time I have a meltdown, I'm really having a meltdown." You can download the show in podcast form here, just skip to the 44:34 mark.

John Brown may not hate the Kardashians, but he does love going viral. So far, Brown's fake rant has has garnered more than 785,000 YouTube views.