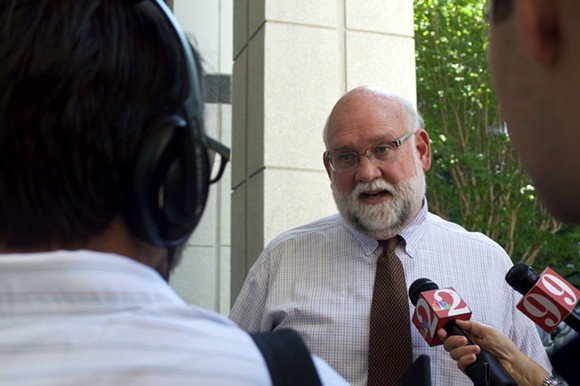 In response to 61-year-old hospice patient who was arrested last week for not paying court fees, Orange-Osceola Public Defender Robert Wesley called for an end to “low-value” arrests of people who can’t afford court fines.

Wesley's office is representing Larry Thompson, who was arrested by the Orlando Police Department on a judge-ordered writ for failing to pay court costs related to a 2010 charge of driving without a license. The Orange County jail wouldn't accept Thompson because of his fragile physical condition, so he was sent to the hospital, where he was chained to the bed. A jail booking photo shows Thompson with oxygen tubes in his nose.

“It’s unconstitutional to punish people for not paying when they do not have the means,” Wesley says at a news conference. “This process is debilitating for a man waiting for the end of his life.”

Faith Sills, a social worker for the Public Defender’s office, says Thompson is doing OK, but is upset about his arrest. Thompson told the Orlando Sentinel that his medical conditions include chronic obstructive pulmonary disease, asthma, HIV and chronic bronchitis. A GoFundMe page has already been started to raise Thompson’s court fees.

“There’s so many people like him in the same situation right now,” Sills says.

The office points out Tuesday morning’s arrests for not paying court fines already includes five people, most of whom have mental holds on their cases. Wesley’s news conference also comes in the wake of a Department of Justice report about heavy-handed court costs and fees in Ferguson, Mo. In the series Guilty and Charged, NPR found that these practices, which punish the chronically poor and homeless, occur across the country, and courts often ignore laws and U.S Supreme Court rulings that make these modern debtors' prisons unconstitutional.

Wesley says he doesn’t know the amount of writ cases in the courts, but estimates it is in the thousands.