Someone vandalized the pink bunny statue at Lake Como Park 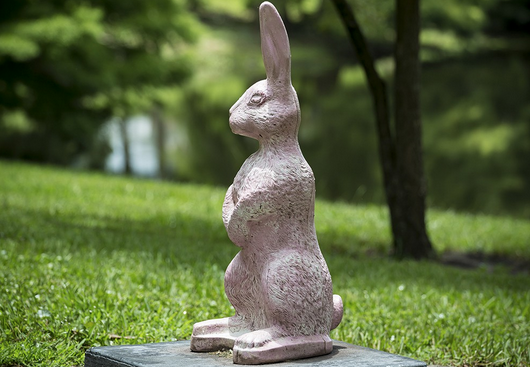 Lake Como Park's pink bunny statue was vandalized, reports Jon Busdeker of the Orlando Sentinel. Pieces of the cement statue's ears were knocked off and found laying on the ground Tuesday morning.

"Both ears on the pink statue ... have been broken. The left ear is almost completely destroyed, with a golf-ball sized chunk of cement still attached to a piece of metal rebar. A 5-inch section of cement remains attached to the left ear’s metal rebar.Tiny, shattered pieces of pink cement fragments were scattered around the base of the statue on Tuesday morning."


The statue, along with its companion in Langford park, was erected by City Commissioner Patty Sheehan in 2014. Sheehan had the bunnies installed in honor of her former aide, Chase Smith, who died of cancer in 2013.

Earlier this year, a few residents living near Lake Como Park complained about the statue and insisted that it be removed. When Sheehan made plans to move the bunny to a different park, another group of neighbors chained the bunny to the ground and erected a “Save Our Bunny” sign. Ultimately, the pink bunny stayed put.

Head over to the Sentinel for pics of the busted bunny.