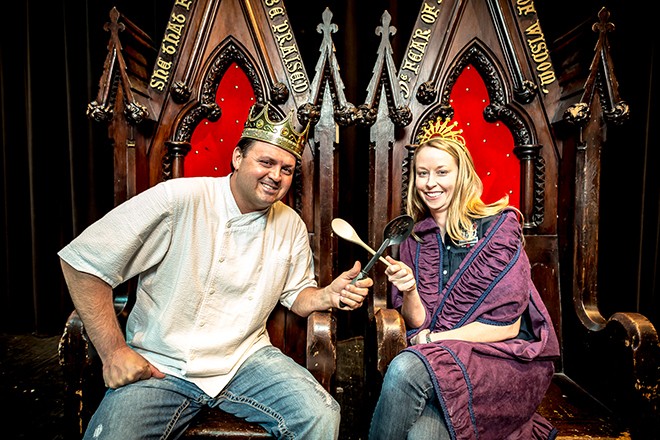 Bidding has opened on the rights to open a new sit-down restaurant airside at MCO – and some surprising names are battling for it next to the usual suspects.

Proposals have been put forth by a team consisting of James & Julie Petrakis and Johnny Rivers (not 4 Rivers BBQ maven John Rivers – Johnny Rivers is the former Walt Disney World executive chef) and Robert "Hard Rock Cafe and Planet Hollywood" Earl, who supplied numbers showing that his Downtown Disney Planet Hollywood did $24 million worth of business last year.

Also bidding is SSP, a conglomerate of brands which offers some interesting possibilities – Shake Shack, Freshii, Real Food. However, they propose to build out an Orlando Magic-themed sports barzzzzzz... oh sorry, I think I fell asleep there for a moment. What was I saying about a sports bar at the airport? REVOLUTIONARY IDEA, GUYS.

Interestingly, the gatekeeper of this decision, MCO executive director Phil Brown, says he ranks the Petrakis proposal No. 1, followed by SSP and then Earl. According to the Orlando Sentinel, the Earl team hit back at that hard:

"The Petrakis concept of a menu changing according to the season – or farm to table – and offerings such as quail at their popular Winter Park restaurants of Cask & Larder and the Ravenous Pig would not work at the airport. 'It won't appeal to families. It appeals to foodies,' said Karen Walker, an attorney representing Earl. The menus of Cask & Larder and the Ravenous Pig, Earl said, are 'inappropriate for the customer base.'"


Snap! But not every traveler has a screaming kid, y'know. Just ... most of them, here in good ol' Mouse Town.

It is meant to be a sit-down restaurant, but a spokesman for the Petrakis-Rivers team says this will not be a Ravenous Pig or Cask & Larder – their concept will be modified to appeal to travelers of all ages, even tiny tots. Say it with me: SWINE & SONS. Oh please let this happen.

Brown and the nine members of Orlando International Airport's board of directors will be the ones to make the final decision, and we'll let you know when it's announced.

When it does open, whoever gets the bid, the restaurant will serve Airside 2. That's the terminal where Southwest Air arrives and departs, and it's one of the airport's busiest. But the restaurant isn't slated to open until 2017, sorry – you're stuck with McDonald's and Sbarro until then.