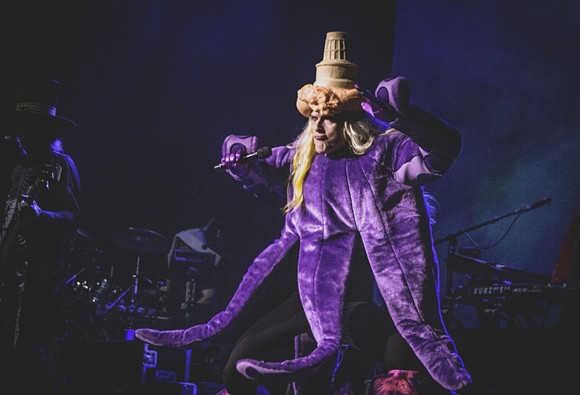 The only break "Weird Al" Yankovic fans got during the torrential downpour of showmanship on Tuesday night at Hard Rock Live (Aug. 11) was at the very start during his theatrically elongated entrance. Fans sat back and watched as he recreated the beginning of "Tacky" by having cameras follow him in his loud get-up as he pranced and shocked fans and Universal-goers with his intrusive "Tacky" antics, which was livestreamed onstage to uproarious laughter before he pushed his way onto the stage itself. This was not the only time he recreated his massively popular videos that night - his performances of "Fat" and "Foil" both came close to replicating the hilarity captured in the videos in real life and were special moments during a show that was nonstop and insanely memorable mayhem.

"Weird Al" was a live wire. I found my eyes flitting around to follow his every move, like I was a freaking cat watching a laser pointer. Not only did he do costume changes nearly every song, but his whole band played along by switching get-ups too, with enough change-ups to wonder if backstage looked like a teen girl's bedroom with cast-off garments covering every surface. The man even did costume changes mid-medley - some of the most indulgent sing-along swirls that generated massive applause blipping through hits like "Gump," "Inactive,"I Love Rocky Road" and "Like a Surgeon." But while the songs obviously swelled hearts (it sincerely felt like he played every song in his catalog in only two hours) and the lights, costumes, props and guest stars (like Darth Vader!) obviously widened eyes - the main spectacle, of course, was "Weird Al" himself. 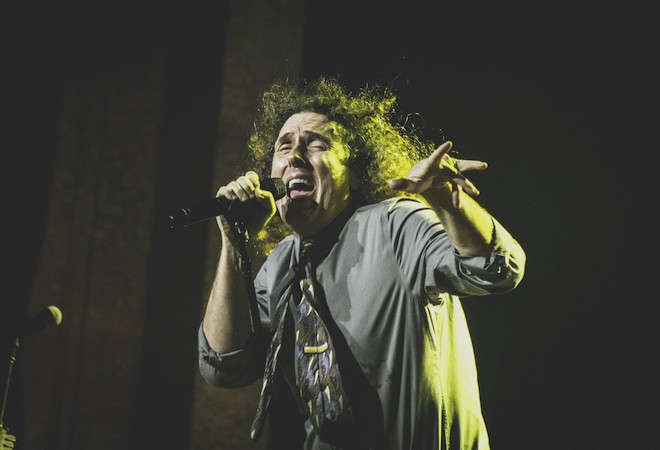 His body contorts like a cartoon to mimic dance moves with wacky grace. His expressive face carried over the sold-out crowd to the very back row, where I was forced to exist as my ticket was Standing Room Only and I took too long plodding out to Hard Rock to post up somewhere closer. In the case of this tour, I'd say superfans should spring for seats, especially front row where "Weird Al" had bouts of physical crowd interaction, at times serenading gawkers frantically trying to selfie their moment and other times stepping on shoulders to gyrate in a giggling victim's face.

Any time "Weird Al" needed a break, he had video cued up to allow for it, so the show was seamless. The reel pulled in his music videos, but also clips from Al TV and probably every pop culture reference to "Weird Al" from his random cameos on shows like My Little Pony to endless name-drops on hit shows like Scandal and New Girl. It's what you'd expect to flash before the eyes of "Weird Al" before he dies - except by now his influence is nearly as pervasive as the culture his songs mock, so he's basically immortal.

When the accordion appears, it's a bump of cocaine to the crowd - everyone turns euphoric on sight. Highlights were definitely performances of "White & Nerdy," "Amish Paradise" and "The Saga Begins" - perhaps the most-sung tracks in the "Weird Al" canon, but also the ones that brought out the vivacious frontman the most.

Which led me to seriously ponder: Is there a more versatile and gripping frontman than "Weird Al"? He never stumbled while switching between rock, pop, hip-hop and, of course, polka, and you'd know instantly if he did, because you can't take your eyes off him - that wild hair catching the light while being whipped around by the wind machine was as entertaining as his "Perform This Way" octopus suit. His delivery felt flawless. Every move felt deliberate and hit your funny bone hard. So even though he's definitely still predominantly "Weird," I walked away feeling more in wonder at this marvel, a genius wordsmith, shrewdly wicked observer and, in my experience, pretty peerless entertainer. 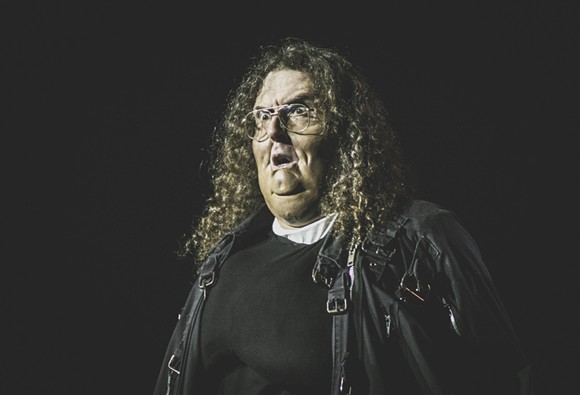