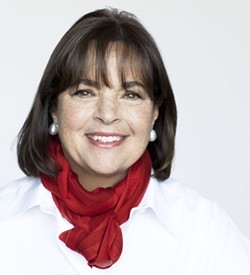 As we reported in early June, three of TV's most popular chefs will appear on the stage of the Walt Disney Theater at the Dr. Phillips Center for the Performing Arts, launching the inaugural Chefs at Dr. Phillips Center series. Tickets for the three-part series go on sale 10 a.m. Friday, Aug. 21, but as yet, the Center is being cagey about exactly how much this will cost you.

Did you know that before Ina Garten, host of the long-running TV show "The Barefoot Contessa," got into the food and hospitality industry, she was working at the White House on nuclear energy policy? Or that Emeril Lagasse was offered a full scholarship to the New England Conservatory of Music, but chose instead to train as a chef? Or that if you're not careful, you could burn yourself on Guy Fieri's toasty shirt flames?

For more information and to buy tickets, go to drphillipscenter.org.