Renee Is a Zombie (Aug. 14, Ethos Vegan Kitchen) is the solo vehicle of Renee Arozqueta, a now-local multi-instrumentalist originally from the Florida panhandle who is self-described as “anti-folk.” I’m not sure about the fidelity of that tag – in not just her case but ever – but she is a singer-songwriter. Although that’s one of the most generic categories out there, she carries some undeniable distinction. 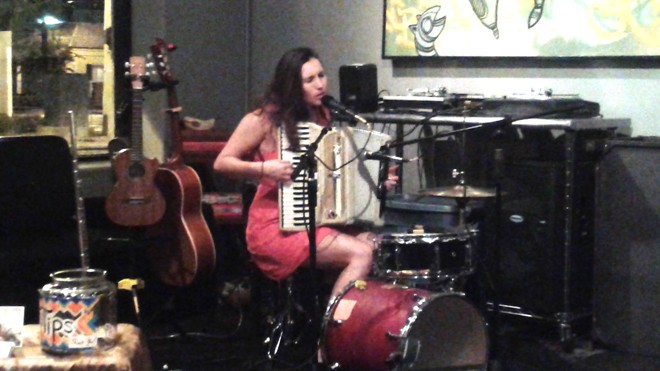 On the fundamentals, Arozqueta’s solid, with pop melodies that are accessible, natural and pretty. More than that though, she’s a legitimate one-woman band who has better coordination than many solo bands I’ve seen (and I’ve seen many) and greater instrumental range than almost all. Furthermore, she’s a loop artist but uses a more intriguing and classical array of instruments than most loop acts do, including accordion, ukulele, glockenspiel and flute alongside the typical guitar and drums. And besides the instrumental construction, she uses loops to create multi-part vocal harmonies as well, adding yet another dimension.

At one point during the show, she wove her voice and nearly all those instruments – some of them in multiple parts even – into a single song. Yes, impressive. No question, she’s got a pretty compelling hook, especially the more arcane edges with accordion, bells and flute. But, don’t mistake, this is earnest music, not some parlor trick. The execution just makes it that much more interesting live. As always, see for yourself at her last local show before going on tour on Aug. 31 at Olde 64.

If something else jumped out to you in that last sentence, let me confirm that, yes, Olde 64 is now starting to do live shows. The hallowed downtown space will be trying to revive the free show tradition that Bar-BQ-Bar once held there to great, if intermittent, results. Beginning this week, the bar will be featuring bands every Monday for free. Tonight’s debut offering will be Masamune, Gutless and Crit, a promising new local that took me by surprise early this year at the Boyfrndz show. RSVP here.

The shows are being booked by Foundation Presents’ Marshal Rones. Besides working for the mighty booking company that powers the Social and the Beacham, he’s a local musician himself so that could add some good street-level cred to the proceedings. To that end, he’s taking inquiries, so interested musicians can email him (marshal@foundation-presents.com) with an EPK or music links.

Shows at Olde 64 will be listed on the Social’s website (thesocial.org). Music starts at 10:00 pm unless otherwise noted and, though the shows are free, donations are always welcome.