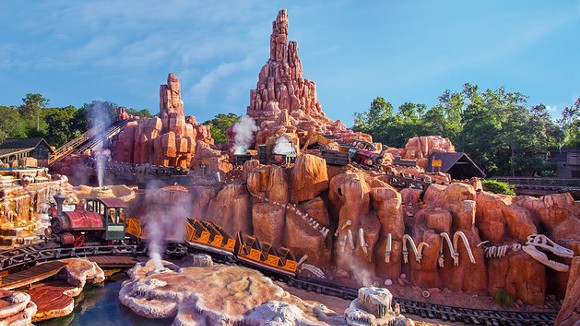 Rumors have been circling for some time around updates to Frontierland in Magic Kingdom. With the ever increasing attendance numbers and now New Fantasyland, the thought is Disney needs to do something in Frontierland to even out the crowds in the park.

While some speculation has been made on a new boardwalk linking to Haunted Mansion to Big Thunder Mountain way of Tom Sawyer Island those plans do seem a few years off.

In the meantime, strong rumors of Big Thunder Mountain Railroad going down for a lengthy rehab early next year point to updates to that ride. According to numerous industry insiders BTMR was originally planned to go down this year but with Pirates of the Caribbean in the midst of a four month long rehab,operations at the park requested that BTMR closure be pushed back.

The generally accepted view from those in the industry, is that the closure of Big Thunder Mountain will be for both regular maintenance and for updates similar to the ones that Disneyland received early last year.

While the Disneyland update included replacing much of the track, the shorter closure here will focus mostly on the third lift hill. This lift hill is one of the least themed sections of the ride; a mock cave-in that regularly breaks down will be replaced by an impressive projection mapping trick.

Using fiber optics to replicate a lit fuse that sparks as it moves along one wall leading to a box of dynamite that "explodes" just as the train escapes the cave. The effect has been a hit in Disneyland.

Our version of BTMR underwent some decent updates in 2013 when interactive queue elements were installed, some of which set off effects within the ride area. This update should see some of those, which have broken, being updated and/or replaced. The bats in the first lift hill will likely be replaced as well, just as they were in Disneyland.

While new rides are used to attract out of town guests, these small updates are used as a way to keep the park fresh to locals. This being one of the main reasons Disneyland, which sees most of its attendance from locals, getting the updates first. Here in Orlando, where locals make up a smaller percentage, many of these smaller updates to older rides are typically put on the back burner. But now with New Fantasyland finished and no major new projects in the works for Magic Kingdom, these smaller updates can be a way to increase interests from locals who otherwise might feels as though they’ve already seen all of Magic Kingdom.