On July 23, law enforcement officers responded to a call about some dogs living in a yard in Winter Garden – all pit bulls, the dogs were chained to trees and kept in homemade pens and coops. According to affidavits and reports filed with the Orange County Clerk's office, animal control officers and the Orange County Sheriff's Department visited the property and found dogs with both fresh and healed wounds, a dog with a bloody mouth and dogs with scarring on their bodies. Some of the dogs did not have food or water. Some had stale bread in their cages.

An affidavit indicates that the ground was covered in "urine, dog feces and had a foul stench that I could smell from the street."

Animal control officers found one dog, a pit bull named Pike, to be suffering from infected wounds to his head and face. His jaw, the affidavit notes, had "pus excreting out of it." The dog was removed from the property and brought to a veterinary emergency clinic, where he was later euthanized because his injuries were so severe.

According to a report filed by the animal control officer on the case, "several dogs are in need of vet care and the neglect issues need to be further addressed," but according to the animal services report, that animal control officer was instructed by a supervisor to leave the other dogs on the property until the Orange County Sheriff's Office could obtain warrants to seize more animals.

Two men – Bruceness Tatum and Raymond Williams – were arrested on felony animal cruelty charges in relation to the dog's injuries on Aug. 14.

A petition was begun by animal-welfare advocates insisting that the county take more proactive steps to get the dogs off the property. However, the Orange County Sheriff's Office says today that it currently has no justification to seize the dogs and while it will continue to monitor the situation, the dogs will remain where they are. Sgt. Al Giardiello, who works on agricultural crimes for the Orange County Sheriff’s Office, says that the case was based on "misinformation" and that there was no evidence of dog-fighting at the property. He says that, with the exception of the dog that was removed, the remaining dogs were "in good physical health required no immediate assistance." He says that despite what was in the initial reports, they did have food and water and were not in need of veterinary care.

"The dogs are in good shape and are not being fought," he says. "What I tell people is that there are two different kinds of people. My dog lives on my couch and sleeps on my bed. But there is nothing illegal about having a dog that lives outside. As long as the dog gets food, water and gets occasional exercise, they were well within Orange County ordinances."

He says that the animal control officer who reported to the scene was "brand new" at her job and "she thought it was dog-fighting, which come to find out later we did a more in-depth investigation and that is not correct. … animal services has since addressed the issue, told the person, that if you don't really know what you're talking about, then you shouldn't make statements alleging things that are going on that aren't."

None of this is sitting well with animal advocates in the county who point out that even if there was no evidence to support dog fighting, the conditions the dogs were living in were so bad that code enforcement was contacted, and the police reports indicate that the stench from the property could be detected from the road. They also point out that animal control has visited the property 12 times in four years due to complaints from neighbors. Tonight (Tuesday, Aug. 18), they plan to attend the Orange County Animal Services Advisory Board meeting, which takes place at 6:30 p.m. at Barnett Park, to demand that the county reconsider. The meeting is open to the public.

They say that it should be well within the county's right to seize animals living in feces and urine, with open wounds and without adequate food and water. They say that a report was filed late Monday night with 311 stating that there is currently a dead dog on the property.

One advocate, Tanisha Branchick, has even shared a photo on Facebook of the decomposing body of a dead dog that she says was taken at the property where the other dogs are still living. "Decided 2 walk the perimeter of the area 'in question,' since Pike's owners are still incarcerated," she posted along with the photo below. "Lo and behold I came across this sad soul ... In all my years of rescue this is one of the most disturbing sites I have ever seen in person ... RIP baby I will name u justice bc I won't stop till it gets served."

When asked about that allegation and the image, Giardiello says there was a report filed and it was forwarded to animal services. "They are going to research it to find out exactly what the truth is with that dog," he says, but it will take some time even if they do recover a dog's body. "With animal cruelty cases, we still have to wait for a necropsy report from OCAS [Orange County Animal Services] vet to figure out what exactly is going on with the dog."

UPDATE: According to Dil Luther, division manager of Orange County Animal Services, he and two sheriff's deputies went out with Branchick to look for the body of the dog in the photo above. He says that they found the dead dog, but that it was not located miles away from the property's border, not far from the turnpike. He says the dog was wearing a training collar, and he suspects it died after being hit by a car.

"It would be an illegal seizure of those animals, I can tell you that straight out," he says. "I love animals. If there was an allegation of animal cruelty, and we found that to be of substance, we’d have had those dogs already. Our hands are tied."

WFTV, which broke this story, posted multiple photos from the property showing the conditions the dogs are living in. Some of those are posted below. You can read the arrest affidavit for Bruceness Tatum here, and the affidavit for Raymond Williams here. 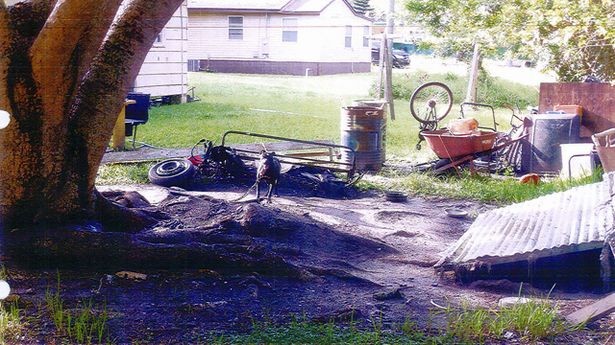 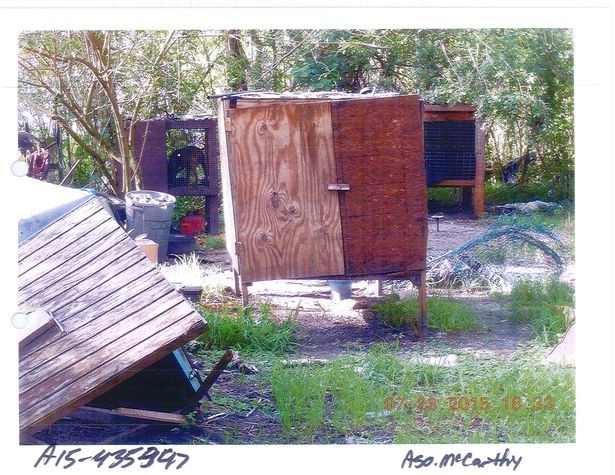