Fracking is the "process of drilling down into the earth before a high-pressure water mixture is directed at the rock to release the gas inside," according to the BBC. "Water, sand and chemicals are injected into the rock at high pressure, which allows the gas to flow out to the head of the well." 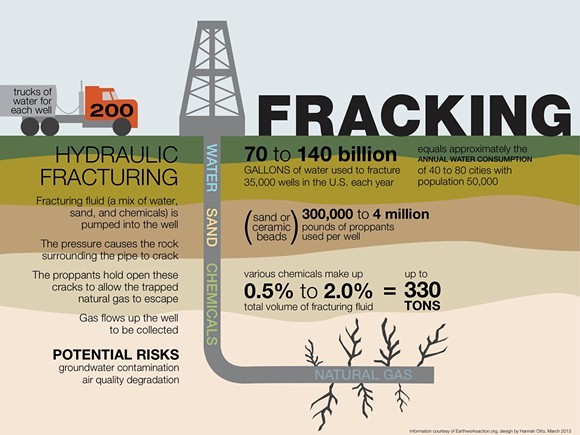 Joined by Sen. Geraldine Thompson, D-Orlando, and Rep. Victor Manuel Torres Jr., D-Orlando, at a press conference, Soto says fracking would risk a few millions in profit for billions of dollars in damage to the state’s environment, tourism industry and health.

Soto became involved in the movement to ban fracking when in 2013, a Texas company applied for a permit to begin fracking in Collier County. Despite requests from Florida’s Department of Environmental Protection to hold off while it reviewed the process, the company decided to ignore this and began work, leading the state to issue the company a cease and desist order and a $25,000 fine. Soto urged local governments to institute their own bans on fracking and for residents to call their local representatives about the issue.

Eric Rollings, chairman of the Orange Soil and Water Conservation District, says fracking would risk the quality of water in the area and raises the possibility of more sinkholes. He added that Rep. Rene Plasencia, R-Orlando, told him he would work with Soto and could possibly co-sponsor the current bill.

“Tallahassee is allowing the DEP to take away our powers of deciding what’s best for our area,” Rollings says. “We’re urging all of Central Florida to band together and ban fracking in Florida.”

“Fracking is very scary,” she says. “The state would be putting businesses above the well being of people and the health of the planet.”