While U.S. Sen. Marco Rubio has been grilling pork chops and hitting small children in the face with footballs on his presidential campaign across the country, court advocates have accused him of inaction when filling federal emergency judicial vacancies in Florida.

As you may remember from a distant high school class, the president nominates federal judges and the Senate confirms them. During the process, the Senate Committee on the Judiciary sends the home state senators “blue slips,” which are letters printed on light blue paper seeking their approval of the nominee for their state. When senators don’t want to confirm the nominee, they can send their disapproval or withhold the slip, and this simple blue paper can bring the whole process to a grinding halt.

A research memo released by Why Courts Matter coalition found that federal judges are being confirmed by the Republican-led Committee at the slowest rate since 1953. The group accuses senators of playing politics by blocking President Barack Obama’s nominees. Under Obama, 82 nominees have been filibustered, compared to 86 nominees blocked under all the other presidents combined.

And here’s where Rubio enters. In Florida, there are currently three judicial vacancies, two in the Middle District, and one in the Southern District. The spot in the Southern District has been empty since May 2014, despite Obama nominating former Miami-Dade Circuit Judge Mary Barzee Flores, according to the Daily Business Review. Barzee Flores has been waiting six months for a Senate confirmation hearing, which can only occur after U.S. Sen. Bill Nelson and Rubio both return their blue slips. Nelson returned his slip, but Rubio has not, leading to an overburdened court with an overload in cases, the group says.

On Tuesday, members and supporters of the Florida coalition protested in front of Rubio’s Orlando office. Rebecca Guerra and Nicole Varma, who was dressed as an injured Lady Justice with a knee brace and several bandages, were there early with multiple signs.

“We have called, and we have emailed his office multiple times,” Guerra says. “We just keep getting the same answer.” 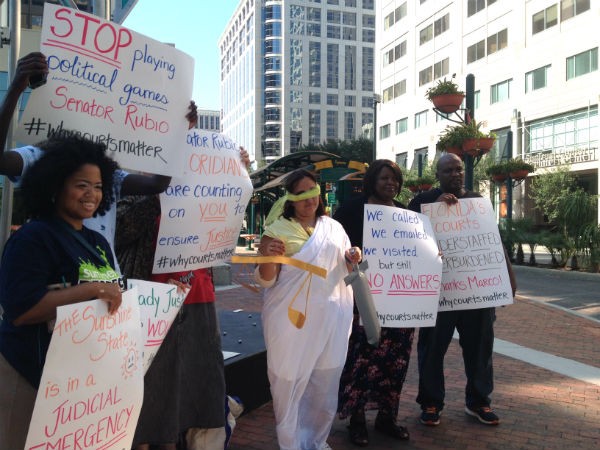 Three staff members from Marco Rubio’s office, who declined to give their names, came outside and told protesters that Rubio is waiting for the Senate Committee to finish the investigation on the nominees and release its findings. Staff members also offered to set up a time with protesters to meet the office’s regional director.

Salandra Benton says the group scheduled a meeting, but she’s frustrated because she’s met with Rubio’s staff multiple times and always gets the same excuse.

“We need him as a senator,” she says. “He needs to tell the Committee to speed the process up because we have a judicial emergency. I don’t want another meeting. I want action.”