So let me get this straight here. The latest show booked by Non-Prophet Organization (Aug. 28, Will’s Pub) was an obviously eclectic bill and you guys weren’t confused, still turned out in significant numbers and were in full embrace of it? What the? Who are you? Nice to meet you. I’ve been looking a long time for people like you. 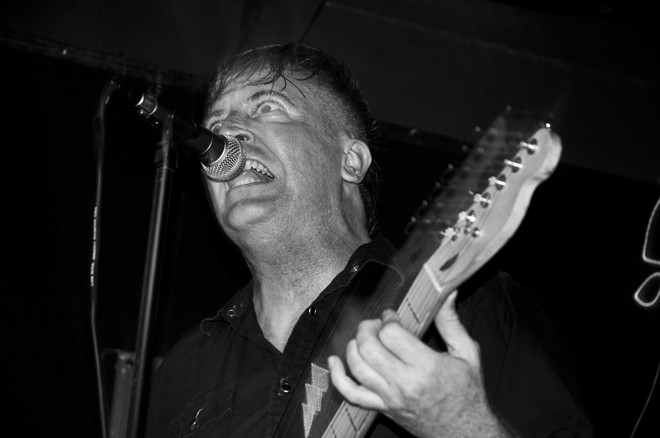 But if you’re gonna go out on a limb, this was the one to do it for. Atlanta headliner Whores has been beating the sweet shit out of the heavy-music cognoscenti around here for a few years but it’s feeling like they’ve been building up to a new national cusp lately. With a mean eye on the throne, these noise-rock princes have been sharpening their machetes and getting into primetime shape with things like their big upcoming Revolver magazine-sponsored fall tour with Portland butchers Red Fang. And it looks like Orlando’s on pace this time because this was by far the biggest, most physical reception I’ve seen for them.

Local opener the Ludes delivered possibly their drunkest performance yet. Luckily, singer-guitarist Jeff Nolan, long known as one of the city’s most skilled axemen, could probably shred under anesthesia so it was still a decent slab of their unapologetically regressive and hot-licked rock & roll.

Those of you who’ve been paying attention for a little while know I’ve been blowing up DeLand’s Junior Bruce for years, from almost the beginning. But it’s actually been a little while since I’ve seen them play, mostly because they’ve been working on new material. Well, they’re making the rounds again with a little more velocity and some new shades in their gaping fury. What hasn’t changed is that they’re still bosses of tarry, boiling swamp-bottom sludge. This was a refresher that it’s overdue for them to start flexing around here again.

Like DeLand first did to me back in the late 2000s and the Space Coast in more recent years, Lakeland has been the most recent hotbed in the area that’s buzzed my radar with impressive bands like Omri Loved Celadon and Poster. Add Pilgrimage to that list. They do well-pitched post-hardcore that carries both emotional range and math intelligence with enough compass to not get lost in either. While many mix styles to Frankenstein results, Pilgrimage is a smart gestalt that taps and unifies the power of all their edges without any fusion compromise.They’re heartfelt but still forceful, technical but not nerdy, and much harder live than their recordings reveal.