The Gatorbone Band folks up the Timucua Arts White House

Although not unheard of, folk music isn’t the primary offering at one-of-a-kind neighborhood performance hall the Timucua Arts White House. More often, it’s jazz, chamber music or – if the Civic Minded 5 are involved – avant-garde sounds. But Floridian outfit the Gatorbone Band (Aug. 30) showed how at home it can be when done with this much craft.

Theirs is not the basic kind of strum-and-stomp folk music that’s refracted through rock or punk. This four-piece string band takes a mature, refined angle that prizes technical artistry over attitude. The music is polite and sweet, but the musicianship is serious enough that it’ll give you some sobering perspective on many of the current folk acts in the popular consciousness. It’s folk music finespun enough for a theater. 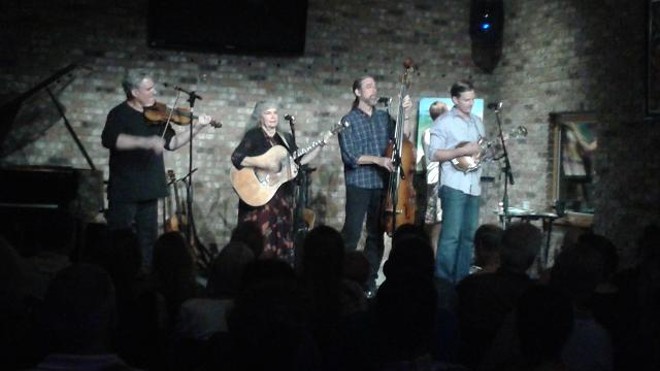 Tapping forms like old-time and swing, the Gatorbone Band has enough influences and geographical background to give them range but enough native Florida blood to give them some root and terroir. Moreover, they have the chemistry of an ensemble that’s been playing together long enough that the 15-year member is the new guy (the next one’s been with them for 25 and the remaining two are a couple who’ve made music together for 40 years). And together they charmed a full house.