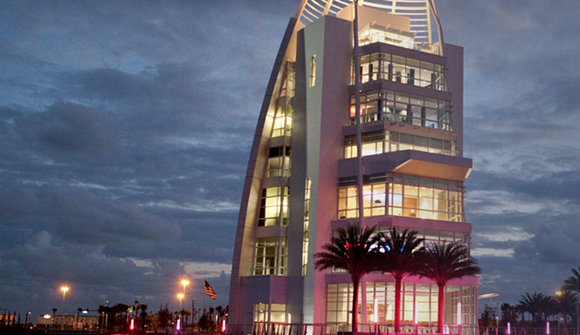 Port Canaveral’s iconic welcoming center and history museum Exploration Tower was billed as a way to keep cruise ship goers in the area for a few more hours and hopefully spending a few more dollars here. The 7 story, $23 million tower opened in November 2013 with an impressive lineup of amenities including a meeting space, a café, a large gift shop, a museum and indoor/outdoor observation balconies.

The tower is part of a much larger development, most of which has yet to materialize. Right now the tower sits in a center, land locked lot of Port Canaveral. Eventually new hotels, restaurant and even an aquarium are in the works for the Port. But until those items open, the tower will be a bit of an odd man out sitting in the middle of a field with an oversized parking lot next to it.

The budget for the year did predict a loss of $300,000, but with two more months to go, the Tower has already eclipsed that loss. At the Aug. 26 Port Authority meeting John Walsh, the CPA Executive Director, reported that the tower has already lost $400,000 since November.

The tower did see some attention earlier this year. The Cocoa Beach Regional Chamber of Commerce Convention and Visitors Bureau officially opened their new kiosk near the gift shop in the tower beginning of May (it had unofficially operated since October). The new desk is designed to help guests discover other attractions in the community.

In July, TripAdvisor recognized the Tower with a 2015 Certificate of Excellence. The award means that the Tower has received consistent high ratings by users of the website. The new certificate signals to TripAdvisor users that this an attraction others have enjoyed.

For now, the attraction will continue to be a costly welcome mat for guests to the port.