The name James Leg (Sep. 7, Will's Pub) may not be too familiar on its own quite yet but his background should be if you’re into blues punk. He was part of the final, expanded lineup of the Immortal Lee County Killers. Even though they were one of the all-time best bands of the genre, probably my personal favorite, his time there was their least memorable phase. But Leg would eventually prove his star worth as the grease-thick engine behind the Black Diamond Heavies, a band that had success in the late 2000s on Alive Records alongside contemporaries like Left Lane Cruiser, Soledad Brothers, Buffalo Killers, Two Gallants and Brimstone Howl.

The Heavies rolled through town a couple times and lit up the few people who were hip enough to catch them. The last time I saw them in 2008, I shared some undercover whiskey with Leg and some others at Uncle Lou’s (sorry, Lou!). A fun fact since we’re almost upon the 20th anniversary celebration weekend for Will’s Pub is that Will Walker was one of the ones hitting off that flask. He was free that night because he was still unemployed, which changed historically two nights later when his pub reopened one block up at its current location.

The Heavies were distinctive because of Leg, and Leg was distinctive for rocking blues organ and piano with the fronting virility and nastiness usually reserved for the guitar. Because they’ve been inactive, he’s spent this decade striking out on his own with a just-released new album (Below the Belt) on Alive, which essentially picks up the tar-bucket blues where the Heavies left off, only with more soulful dimension.

Just like the Heavies, Leg’s live set-up is a duo. Even with an attacking drummer riding shotgun, there’s no question who’s the pounding heart here. As soon as he hits the keys, it’s with the sizzle and splatter of fatback on a hot pan. With hands that move like hexed tarantulas, no one cranks the ivories as hard as this guy. And because he can wield a different keyboard with each hand, he really fills the speakers with Rhodes piano, organ and bass keys. Few musicians balance edge and artistry like this. Add in the showmanship of draining your soul into every performance and you get one seriously electric display. 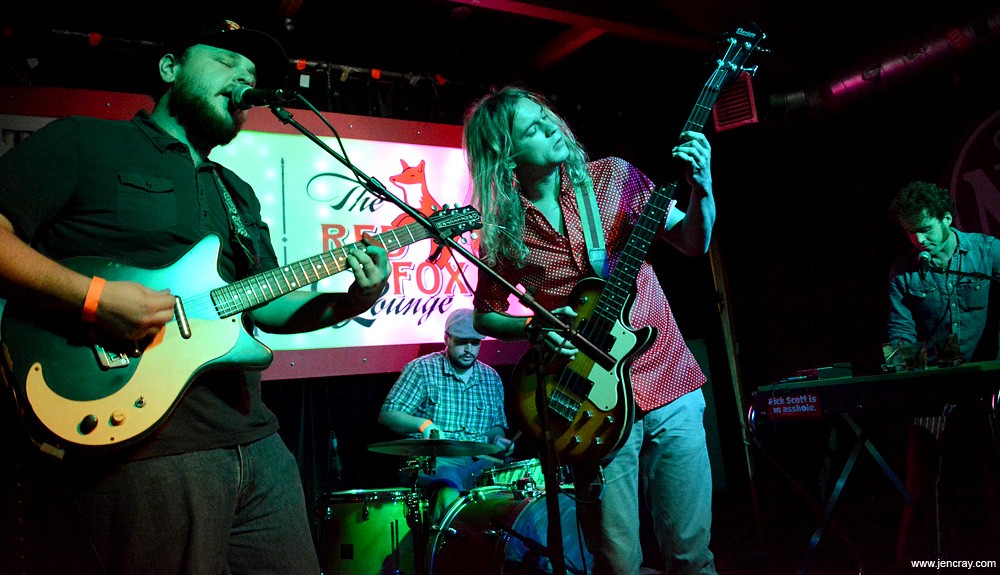 Opening was Orlando’s Slim Walker and His Orchestra, whose merge of country and ‘60s rock was weird and rousing as always. I’m never sure if I should square dance or do the Swim whenever they’re playing, but at least moving is the general impulse they inspire. This is a good-time band. And as they get better, the less weird it’s becoming.